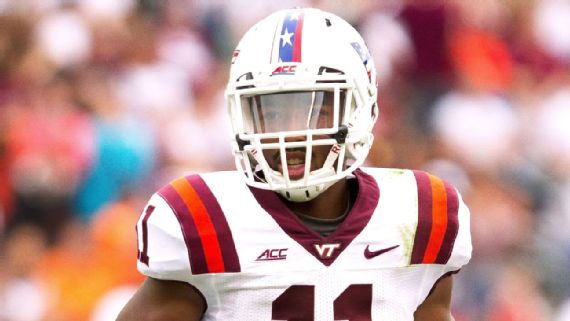 The National Football League Combine is about eight days away. It may be football in underwear but at least it’s football.

ESPN Draft Guru Mel Kiper, Jr. released his latest mock draft today and he has the Steelers taking Virginia Tech cornerback Kendall Fuller at number 25. Fuller is the fourth brother who will play in the NFL and is predicted to be the best one of the bunch. I’m not gonna lie, I just can’t get my mind wrapped around the Steelers ever taking a corner in round one.

SCB contributor Ben followed up the news that James Harrison would return in 2016 with the news that that isn’t necessarily the case.

Lot of talk this week about Troy Polamalu keeping his distance from the Steelers. His agent made it very clear; it’s not the Steelers that are keeping him from being more involved with the franchise. I explained at the time that it went much deeper than that.

The fact that Steelers’ GM Kevin Colbert admitted that 4-3 defensive ends aren’t off limits like they once were tells you all need to know about the direction of the defense. In 2015, they spent about 25% of their time in the 3-4 base. The rest was devoted to nickel and dime packages. The Steelers want to be able to use multiple defensive linemen mixed with linebackers and they need versatile guys. That’s why 4-3 D-Ends are in play.

Tweet of the Day… Happy Birthday to Steelers’ Le’Veon Bell.

One of the veteran quarterbacks thought to be on the Steelers’ radar for the back-up job was Chad Henne. He’s now off the radar after re-signing with Jacksonville.

The closer free agency gets the more I think Kelvin Beachum will be in another uniform in 2016.

There is no way the Steelers can allow Lawrence Timmons to make $15 million this year. Much like they did with Troy Polamalu, they’ll likely sign him to a new deal. 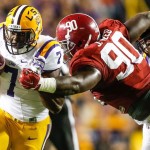 Timmons will not make $15M this year. He will be paid $8.75M. The rest of his cap number is bonus proration for money paid in past years.

Agree on the question of a 1st round CB. More than that though I just don’t think that this Fuller has the same smooth change of direction skills that his brother Kyle has. I don’t know that I agree with the notion that this is the best Fuller brother. If he were he would be a top 10 pick.

I’ve seen two analysts suggest he is the better Fuller brother and I haven’t seen enough of him to combat that but hyperbole like that usually runs astray.

My thoughts, Fuller won’t be there when the Steelers pick. I have mocked this draft several times and i see us taking another OLB. If we are going to get help in the secondary it will only come via trade and i don’t see that happening either. I see us using a lineup very similar to 2015 even in the defensive backfield. This team was pretty much convinced there were no problems there last year. With the current mentality i don’t see more than 3 players from this draft on the roster nor do i think there will be a starter coming out of this draft. Just my two cents.

I don’t think they’ll take another OLB this year. They should but won’t. They’ll use exactly the same OLB rotation they used in 2015, unfortunately.
They had to convince Will Allen not to retire at the end of 2014. I don’t think he’ll be back. I think we might see a change at SS regardless. Be that a new FS coming in and Mitchell being moved to strong or a new SS free agent signee/draft pick. But, otherwise I am afraid you’re right. They’ll use a defensive backfield very similar to the one they fielded in 2015. I really hope I’m wrong though. A solid safety and CB could make all the difference on this team.