SCB Steelers’ Quick Hitters: The “How Do They Do It” Edition

One of the ways I like to make myself miserable is by reading thru the “Asked and Answered” on steelers.com as well as the chats done by the guys at the Post-Gazette. I honestly find myself feeling bad for these guys because of some of the questions they get asked. Bob Labriola was asked for probably the millionth time about Ryan Shazier moving to safety. Why? Why would someone ask that again?? How much more proof do you need to see he isn’t moving to safety?!?!?! While they sometimes bring questions of ignorance on themselves I still do not know how they do it.

The Steelers signed fifth-round draft pick Brian Allen today. Remember, these deals are all slotted now so there is very little room for negotiation. His deal is for four years and only the first round picks have the option for the fifth year.

Tweet of the Day… “Could” be the league’s most dangerous WR duo. Let’s not get ahead of ourselves.

NFL from the Sidelines: #Steelers' Brown and Bryant the league’s most dangerous WR duo https://t.co/Th4JXzmf2p

I am extremely curious to see what the Steelers do in their secondary. I say that because there are so many question marks. Can Senquez Golson stay healthy man the slot? If not, is it Coty Sensabaugh? Where does Cam Sutton play? Is he destined for the slot or the boundary to compete with Ross Cockrell? This will be a topic on an upcoming podcast I can tell you that.

Very sorry to hear about Jerome Bettis being let go as part of ESPN’s purge. The Bus wasn’t the best analyst but I always thought he did a very good job.

The Steelers continue to plow through Phase Two of the OTAs with the rookie mini-camp coming up later this week. 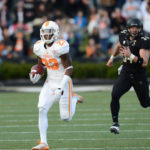 Steelers’ Special Teams Should Benefit From This Draft Too