I mentioned this the other day but I’m going to repeat it again. I think there’s a really good chance the Steelers will double up on the EDGE position in this draft. I do a lot of different mock drafts not in an effort to ‘act as the Steelers’ but to see where players could possibly fall. It’s far from a perfect science but it helps to see how things could develop. With so many EDGE and outside linebackers and the Steelers having a huge need there, I can see a scenario where they could take one in the first and third rounds. One could also argue they might double up on the cornerback position if they don’t do so on the EDGE.

The SCB Podcast sponsored by BodyTech Gym will air live tonight at 10pm Eastern on spreaker.com. We are featuring a new segment as well at the very end that’s likely to be informative and humorous.

Tweet of the Day…. Killa Cam on the mountain top!

I spent time focusing on the film of Clemson running back Wayne Gallman yesterday. I really like his style and quickness. If he doesn’t learn how to pass protect though he’ll get a QB killed. If the Steelers think they can do that then by all means take him in the later rounds.

I don’t know which one but one position in this draft will be ‘over-drafted.’ That means teams start to panic because guys they like at one position start to come off the board sooner than expected so they reach. Many times this is the quarterback position but do not be surprised if it is the EDGE rusher or cornerback position. Those spots are coveted in today’s game and both are deep in this draft.

Just some food for thought with our Steelers sitting at number 30. 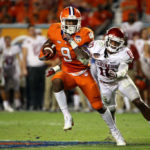