Today begins Phase Three of the Steelers’ Offseason program which means the veteran players will be much more plentiful. This is always one of my favorite moments of the offseason because most recently we heard all kinds of glowing reviews about the rookies from their mini-camp. With the vets back, the rookies will get a rude awakening when they see the speed and work ethic of guys like Antonio Brown and James Harrison. Trust me, it’s a good thing and it’s all part of how these young and new players learn how to be “Steelers.”

There is a lot of discussion since Ladarius Green was released about the Steelers going to more four-wide receiver sets. If, and here is a big ‘IF,’ JuJu Smith-Schuster progresses to the point where he can play inside then with his blocking ability the Steelers may not lose as much without a true tight end on the field. That said, Todd Haley isn’t going to completely abandon what he does which is consistently use his tight end all over the formation. While Jesse James isn’t Heath Miller, he’ll still be the primary guy for the foreseeable future.

Do not be shocked if Darrelle Revis comes in for a physical….

Steelers.com’s Bob Labriola gave a very explanation of how the rookies and their jersey numbers work in his latest ‘Asked and Answered.’

Tweet of the Day… We certainly hope so JuJu!

The best is yet to come… pic.twitter.com/F1ZjoGGQE7

Don’t forget the Steel City Blitz Podcast presented by 26shirts.com/Pittsburgh will be live Thursday night at 10pm Eastern. We’ll cover the latest from OTAs and much more.

Thoughts with those affected by another senseless attack last night in England. I could go on but I won’t. There are other forums for that.

Game Six tonight! Can the Pens close it out in Ottawa? 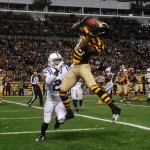 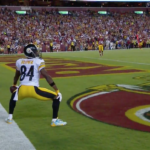