SCB Steelers’ Quick Hitters: The “Christmas is Getting Closer” Edition

Today is my last day of work for a couple of weeks Steelers’ Fans so forgive me if I’m a bit giddy.

With Christmas fast approaching, it makes me think back to Christmas’ past when I was younger. I’m guessing like many of you, there were no presents I looked forward to more than the ones I knew would be ‘black and gold.’ The best one ever was my authentic Terry Bradshaw jersey. Mind you, this was time when getting an authentic was not easy. There was no internet and China wasn’t faking them yet. It will always be my favorite and is now nicely framed in my Fortress of Steelertude.

‘Nail the Number’ is already at record entries. Don’t miss your opportunity to win some holiday cash. Entries due by 8pm Eastern Christmas Eve.

If you haven’t checked out my daily updates please do! Click the link to listen.

DeAngelo Williams was a full participant yesterday but take that with some caution. He did the same last week and then the knee swelled up and he didn’t play. Obviously his services would be incredibly welcome.

Ladarius Green remains in concussion protocol while Stephon Tuitt’s status is still up in the air.

Speaking of concussions, Vontaze Burfict is reportedly in concussion protocol. I’m not a doctor and I don’t play one on the internet, but I would bet a lot of money Burfict was concussed when he re-entered the game Sunday. As we’ve determined here as a group at SCB, with his lack of intelligence how could you tell any different?

Tweet of the Day… Great selfie here from Charlie!

Hanging out at West Greene Middle/Senior High School this morning. Thanks for having me be a part of your peer mentoring program pic.twitter.com/ryoQyh3862

Because the Ravens’ have the 28th ranked rushing attack in the NFL I fear many are just dismissing the possibility that they may run the ball against the Steelers’ D. If Stephon Tuitt can’t go, I believe you’ll see Baltimore make a very concerted effort to run the ball. It doesn’t have to be five yards a crack but if they are getting anything over four that’s going to be a success for them.

Ed Bouchette of the Post-Gazette wrote a column this week about the Steelers’ need to be less conservative on offense against the Ravens. I tend to agree. Baltimore wants to play a close, defensive game and hope they get just enough big plays on offense. The Steelers need to get an early lead and force Joe Flacco to play from behind where he’ll make mistakes.

Here’s my take on why this is Mike Tomlin’s biggest Ravens’ game ever. 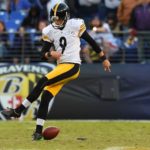