Good morning Steelers’ fans! Hope you enjoyed your long weekend. For me, I’m back to the classroom which will make my jealous crew very happy to know I’m working again and not lounging by the SCB pool.

Rookie defensive lineman Javon Hargrave was listed as the starter at nose tackle on the initial regular season depth chart yesterday. He then left practice early with a knee injury that Mark Kaboly thought “looked serious.” The good news is however that the injury is not significant and he is expected to play Monday night.

Justin Gilbert, the Steelers’ cornerback, said he was “glad to be out of Cleveland.” Well, I guess I can’t blame him but at the same time if that’s why his play wasn’t first round worthy then that concerns me. I’m of the mind that you play hard and take things serious period. Shouldn’t be any caveats.

Couple of number changes in case you missed them. Justin Gilbert will wear 24 and Tyler Matakevich will wear 44.

Tweet of the Day…  He’s right. Not too bad indeed.

New Steelers’ QB Zach Mettenberger, who will wear number 18 by the way, has a great opportunity in front of him. While I don’t think he’ll ever be a regular starter in the NFL, I think he can learn a great deal playing behind Ben Roethlisberger. With Landry Jones’ contract up following this season, Mettenberger could find himself with a prime backup spot.

#nailthenumber is underway! Make sure you are following @SCBlitz and @CraigScott31 to enter. This is your opportunity to win $1,000 and maybe Steelers’ tickets too!

I hoped a little reverse psychology would get David DeCastro and the Steelers to agree on a new deal… The clock is ticking. 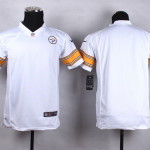