Good Morning Steelers’ Fans! Hope you have a chance to enjoy Labor Day!

The Steelers appear to have their opening day roster in order now but don’t be surprised if there are still some moves to come. I expect a free agent tight end, perhaps Tony Moeki to come in for a visit. Here’s the roster for those that missed it.

The two biggest issues right now are Senquez Golson and Bud Dupree. With Dupree on the Reserve/Injured List, Golson will have to remain on the active 53-man roster. Golson had his surgery performed by the same doctor who got Maurkice Pouncey right after some earlier issues. Therefore I expect Golson back sooner than you might think.

#Nailthenumber is coming tomorrow!! Make sure you follow @SCBlitz and @CraigScott31 to participate for your chance to win  $1,000!!

The Dupree injury is troubling. He had surgery a few days ago on a “sports hernia.” It’s believed that Dupree will make it back for the second half of the season but I’m not as optimistic. These types of injuries usually require rest so I’m thinking this will linger throughout the season should he return. The most troubling part of this to me though is the fact that the Steelers waited this out so long. They felt like they could rehab it but you’d think after a few weeks that surgery would be imminent. Well, it was but not soon enough for me.

The Steelers brought back Steve Johnson once Dupree was designated to the Reserve/Injured List. Johnson is much more of an inside guy than outside. That really puts the pressure on Arthur Moats, Jarvis Jones, James Harrison and Anthony Chickillo to get pressure from the outside.

Tweet of the Day… Seven has lots of meaning for us doesn’t it?

This was my take on the Steelers trading for Justin Gilbert.

All kinds of predictions and previews coming from SCB this week! 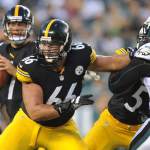