Another Monday Steelers’ Fans and at the very least we were supposed to have woken up this morning having seen some actual football. That didn’t happen however so we wait…

The National Football League decided to cancel last evening’s Hall of Fame Game between the Packers and Colts because the field was deemed unsafe and unplayable. How is it, that a field, that is played on by high school teams and two NFL teams once a year couldn’t have been improved over the last year? The Steelers almost to a man in agreement, said the field was the worst that many had ever played on last year. This is not the type of start Roger Goodell and the NFL needed for 2016.

We knew coming in that the Steelers were going to be really to be really good at the linebacker position and it’s been even more competitive than thought (I wrote about it yesterday). But it isn’t just the usual suspects that are going to make Mike Tomlin’s decision so tough. L.J. Fort and Steve Johnson weren’t really thought of as much more than ‘depth’ guys but someone didn’t tell them. Both are having very good camps.

From everything I’ve seen and heard, Steelers’ tight end Jesse James is having a good camp and is making people feel better if Ladarius Green isn’t ready to go. Don’t mistake as him being the next great Steelers’ tight end but I think he’s going to be a good player.

Cnic provided his latest Fantasy Football article over the weekend. Check it out!

Tweet of the Day… I’ve wondered this myself DWill.

Just a reminder but the Steelers are off today. The Detroit Lions come in tomorrow for joint practices leading up to the two teams squaring off in their preseason openers at Heinz Field on Friday night.

The Browns have officially named Robert Griffin III their starting quarterback. So there’s that…

Have a great start to the week Steeler Nation! 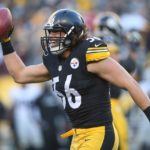