Good Morning and Happy Monday (if there is such a thing) Steelers’ Fans!

Today is the 72nd anniversary of the greatest amphibious assault in the history of the world. We know it as ‘D-Day’ and it took place on the beaches of France where countless Americans, British, Canadian and French troops lost their lives. Our WWII vets are living history and they are passing on quickly. Talk to them and educate yourself before they are gone!

I’m very excited to have friend of mine and friend of the site Craig Scott offer his take on the “Steelers’ Men’s Fantasy Camp” he attended last weekend. His piece should be coming this week.

Craig also found himself “trending” after he tweeted comments from Steelers’ Secondary Coach Carnell Lake about Brandon Boykin. Lake claimed the Steelers’ doctors missed a degenerative hip problem that was plaguing Boykin. All I can tell you is there is another side to the story and for now that is all I can say.

Ben Roethlisberger’s Youth Football Camp is coming up. There’s still time to get your son or daughter involved!

Tweet of the Day… DWill off to do some shopping!

Love seeing our guys out in the community. Fans often forget these players are actually real human beings with lives away from the game too.

Steelers’ third round selection Javon Hargrave officially signed last week. A four-year deal as it is with most rookies.

Rightfully so, everyone talks about the Steelers’ receiving corps from the top down, but I’m telling ya right now the battles for the fourth and fifth receiver spots are going to incredible. Eli Rogers, Demarcus Ayres, Shakim Phillips and Canaan Severin will all push for a roster spot. 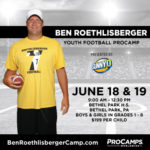 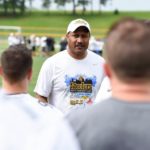 I am excited about the WR battles as well, because the level of talent there bodes well for the future. But, the fact that DHB was given a $400K signing bonus all but guarantees his roster spot and solidifies him as the #4 WR. I think one of the 4 makes it. (I’m rooting for Severin; only because he’s such a likeable young man, I think his future is as a possession receiver only.) I think one more will be kept, but on the practice squad.