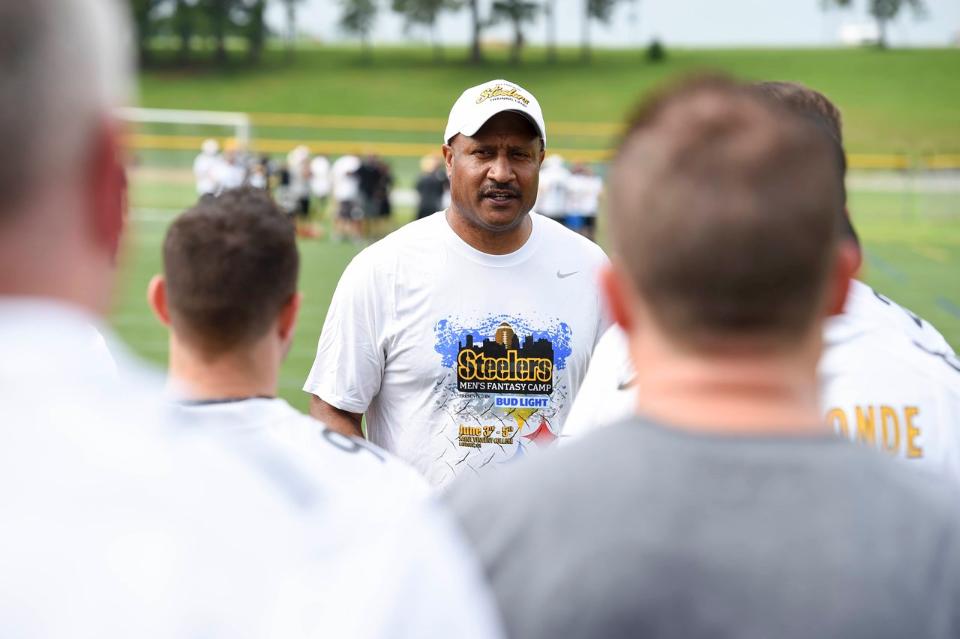 There’s a reason that for the most important pieces of information, the President of the United States will take it upon himself to deliver news to the people of America. For everything else, he leaves the small stuff to the press secretary who fights off the media day in and day out.

Since taking the head coaching reigns in Pittsburgh, Head Coach Mike Tomlin has essentially followed the same pattern as the President. He uses his weekly press conferences to relay the “important information” while leaving the small potatoes to Burt Lauten’s PR department. His coaches, for the most part, are like some people’s children. They are to be seen and not heard.

You’ll notice I put “important information” in quotations because how often does Tomlin really say anything of the important variety?

With this paradigm in mind, I can’t help but wonder just what Steelers’ Secondary Coach Carnell Lake was doing this past weekend at the Steelers’ Annual Men’s Fantasy Camp in Latrobe. This event is run by several former Steelers including Craig Wolfley and Tunch Ilkin and has many former players that attend.

One of the sessions for the campers is a chance to sit and listen to the former players and in one case, this former player is now a coach. Lake took the microphone and revealed two rather interesting bits of information and I’m guessing that Mike Tomlin can’t be thrilled.

As was tweeted by Craig Scott who was in attendance at the camp, Lake revealed that Brandon Boykin saw little playing time because of a degenerative hip problem that limited his ability to run. Lake went on to claim that Steelers’ doctors missed the problem when they evaluated him when the team traded for him. He also said the Eagles were aware of it and that’s why they wanted to make the trade.

This is curious on a couple of levels.

If Boykin had such a condition then why did the team play him so much near the end of the season? When you look at Boykin’s career statistics, he’s played in every single game in which he’s been on an NFL roster. How does a guy with such a problem never miss a game?

Lastly, while it may explain, emphasis on may explain, why Boykin was released after just a month in Carolina and was sent away from Atlanta without a deal, what purpose did it serve for Lake to discuss it publicly? When you take a few steps back and look at this entire situation from the 10,000 foot level, something just doesn’t make sense.

Through game 11, Boykin played a total of 21 snaps on defense. The next week versus Indianapolis, Boykin played 40 snaps and the Monday after the game Lake was quoted that it was his decision to play Boykin in the nickel formation, while sending Antwon Blake to the sideline and putting William Gay outside.

The last five games of the 2015 season, Boykin played 252 snaps on defense.

Brandon Boykin played less than 3% of the Steelers defensive snaps through game 11. After which, he played 72% of the defensive snaps in games 12 through 16; all the while he continued to play special teams on top of those defensive snaps. Boykin also played 126 of 148 defensive snaps, or 85% of the snaps on defense, in the two playoff games. His snap count went up progressively over the course of those final seven weeks in Pittsburgh.

If Boykin could not be counted on and “could hardly run” as Lake reportedly described him, why would Lake make the decision to play him that much? If he couldn’t run, why would Boykin seemingly be given more responsibility each week?

The other nugget of information spilled by Lake was that the Steelers were thoroughly prepared to draft Houston cornerback William Jackson III before the Cincinnati Bengals took him one pick prior. Now, is it uncommon for these types of things to come out in the months after the draft? Not necessarily. But, when it involves a division foe it does become less likely to ever be divulged.

In this situation, as with the Boykin tidbits, I see nothing positive to be gained by Lake having disclosed the information.

This article is partly speculation and lacks any hard conclusions, admittedly. But the facts as we know them do not add up. This is especially true when you consider that rumors of chronic health conditions can have a negative impact on a player’s career. You couple that with Tomlin’s preference for saying as little as possible, and it makes Lake speaking out even more curious. It leaves us with no option but to speculate because this conversation, as it was reported, leaves a lot of questions unanswered.

What was Lake trying to accomplish? Is he prone to speaking without thinking? Is this some kind of coach’s rebellion? Does he have some kind of an axe to grind with Boykin? That seems pretty far fetched given that he gave Boykin more responsibility as the season went on.

Again, it should be emphasized that these are questions, not conclusions. Certainly there are aspects to this situation that we are unaware of and details to the story that we do not know.

The only thing we know for certain is that Carnell Lake said far too much on Saturday. Even if those comments were somehow taken out of context, it’s hard to see why Lake would speak on a former player who is currently a free agent and say anything at all negative, especially when Lake himself claimed to be the guy who made the call to give said player a progressively larger role week over week in 2015.

[…] Carnell Lake revealed a possible reason for his inability to find a team so far this offseason. Ben and I wrote are thoughts on Lake’s comments yesterday. This is what I can tell you without revealing sources; there are two very different sides to the […]

[…] Carnell Lake revealed a possible reason for his inability to find a team so far this offseason. Ben and I wrote are thoughts on Lake’s comments yesterday. This is what I can tell you without revealing sources; there […]

You see, the truth of the condition doesn’t matter to me one way or the other. He should have kept it to himself regardless. To the Boykins, football is a meal ticket. It’s how they feed and clothe their kids.
Lake, as a former player, should know better. Do I believe that Lake “started” the rumor? No. I know for a fact that he did not. But, Boykin has no choice but to paint this as a personal attack at this point and deny it. He has to look out for his own interests. At the end of the day, talent trumps just about everything in he NFL. If he doesn’t get the chance to play again, it will be because he can’t. But, given what he contributed to Pittsburgh last year, the Steelers should not have contributed to his diminished chances to earn a living. It was a crappy thing to do, no matter how you look at it.