Welcome to another Monday Steelers’ Fans.  Ya Ok I’ll shut up.

Here’s what I’m curious about with regards to the NFL interviewing the Steelers’ James Harrison and the Packers’ Clay Matthews and Julius Peppers… As you know they were named in an Al-Jazeera article about perfeomance-enhancing drugs. Let’s say one or all is found to have used PEDs, what does this then do for Peyton Manning who was also named in the report? He’s retired so he’ll skate cleanly in most circles.

With his release last week from the Steelers, Shaun Suisham has since announced his retirement. The knee he so badly damaged in the preseason opener just hasn’t healed well. He’s a good guy who came along at the right time for the Steelers. Wish him well.

[Update:] I jumped the gun a bit on his retirement. The source I saw in the media was speculating and I didn’t make the distinction. My bad.

Earlier this year Steelers’ Head Coach Mike Tomlin took to Twitter to admonish DeAngelo Williams who had gone on plenty long in his dialogue about Manning. Perhaps Tomlin should do the same now with linebacker Vince Williams whose tweets are not always a good idea.

With Suisham’s departure, it was a perfect time to continue my SCB Summer Series which profiles key players for 2016. Therefore here are my thoughts on the importance of Chris Boswell.

Antonio Brown has been in California training with Seahawks’ QB Russell Wilson and the reaction by Steelers’ fans has been priceless and sadly predictable. Many are upset that he would do this with a player from “another team.” This happens every offseason people so slow down on the outrage. Ben Roethlisberger used to train with Larry Fitzgerald so just relax. 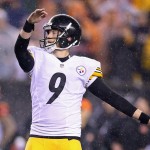