Not sure why I pay for Sunday Ticket when I can’t get it because of stupid overtime game between two teams I could not care less about!!

Good opening drive stalls as Markus Wheaton drops a TD on third down then Chris Boswell has his field goal blocked.

Eagles with some good play-calling and execution on their opening drive. Shazier went off and in a lot of pain to right leg. Didn’t look good at all. Eagles get a field goal lead 3-0.

Steelers second drive: Started inside the ten after penalty on kickoff. Wheaton with another drop on second and four. Steelers forced to punt after failing to convert on third and four.

Eagles second drive as bailed out by a personal foul injury by Lawrence Timmons… One third and 13 Eagles convert. No pressure at all Wentz. First quarter ends, Wentz 8 of 10 passing. Drive results in a touchdown. Shazier, Rob Golden and Jarvis Jones all off injured. 10-0 Eagles

Fitz Toussaint and Sammie Coates are not kick returners. Have to find a solution to that problem.

Steelers third drive will start inside their own 20 again. Steelers face third and five… Beauty down the sideline to Coates! Ben exclusively in the gun. Sacked on third down. Boswell gets the field goal, trail 10-3.

Eagles third drive begins with first down throw. Another missed tackle by Artie Burns… Play-calling and execution by PHI has been excellent. Steelers have not had any answer. Drive continues…  Huge third down here, Steelers hold but field goal is good. 13-3 Eagles.

Steelers fourth drive facing crucial third down and four here at two minute warning. Eagles get second half kick so keeping the ball critical. Pass to Rogers is short of the line. Poor route and poor block by James. Punt.

Eagles start fourth drive at their own 20 with 1:45 to go in the first half… Steelers hold despite giving up a few yards. Punt…. Steelers run out clock.

Story of the first half is Wentz’ poise in the pocket and lack of pass rush by the Steelers. Injuries to Timmons, Shazier, Golden and Foster. Despite the poor half, Steelers easily in this game. 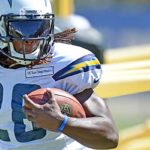