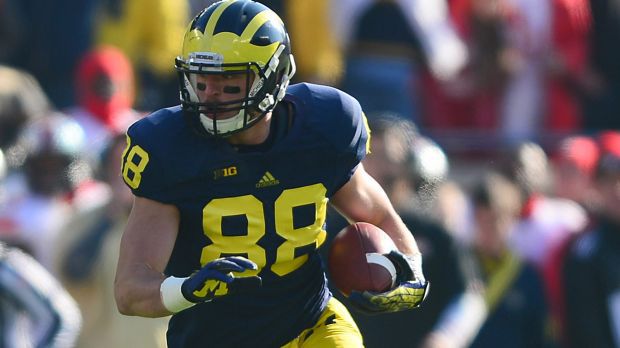 I have tremendous doubt about the availability of Ladarius Green for the 2017 season in Pittsburgh. Whether that means they will look for a tight end in this draft or not I can’t say but Michigan’s Jake Butt is certainly an option.

What’s to Like: Smart player… Finds holes in zones and creates space when quarterback is scrambling… Pretty good elusiveness for a man of his size… Doesn’t mind going over the middle and fights for every ball thrown his way… He’s a stick mover; has a nose for the first down line… Boxes out defenders really well when he sets up over the middle… Good, wide-base blocker when he’s stalking DBs…

What’s Concerning: Needs to add some strength/weight to his frame… Going to have improve blocking technique; tends to grab when defenders disengage… I don’t see him being a down-field threat… Will likely struggle shaking LBs and safeties in man-to-man coverage… Run blocking effort is there but he needs work technique-wise… Has he peaked already? Best games were in early part of career… ACL injury in Orange Bowl

The Verdict: Butt is going to be a good, solid NFL tight end. He’s likely going to drop into the third or even fourth round because there are more athletic tight ends in this draft. That said, he is likely going to make a team happy because he’s played under a former NFL head coach and already has keen insight into expectations. Reminds me a little of Jesse James but a tad more athletic. The ACL injury isn’t supposed to hinder him moving forward and he should be ready for a team’s training camp. I like him but I don’t think the Steelers will take a guy so similar to one they already have.