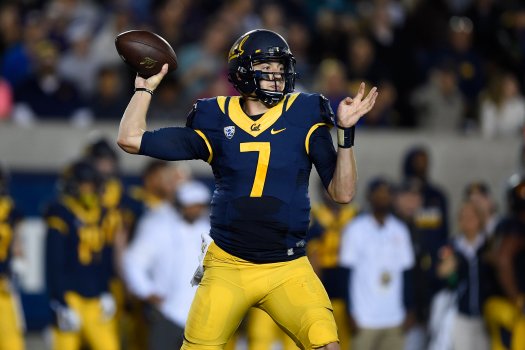 What’s to Like: Webb utilizes his frame and stands tall in the pocket… His feet are decent and he slides side-to-side in the pocket well to avoid pressure… Pretty good release; keeps the ball up high… Adapt at getting the ball out quick… Hangs in well against the blitz. Solid on the roll-out; squares shoulders well.

What’s Concerning: Highly questionable decision-making at times… Accuracy leaves a lot to be desired… Struggles with the all-important ‘deep out’ route… Completion percentage should be higher with so many throws under ten yards… Ran some option at Cal but isn’t quick enough to do that at the pro level… Throws falling backwards at times; arm strength isn’t good enough to get away with this.

The Verdict: I view Webb as I do just about every other quarterback who comes from these spread offenses; there’s talent but there’s going to be a lot to teach. His footwork will need serious attention right off the bat because of how often he spent in the shotgun. That said, I also believe if a guy has ability and the right work ethic then I don’t care what style you play in. With the Steelers bringing him in for a private workout, it certainly bears watching.

He has some similar traits as Ben Roethlisberger in that he has a pretty good internal clock and doesn’t let a play die but the comparisons will stop there. Webb has recently been mentioned as a potential first round pick which tells me just how desperate teams are for quarterbacks. I don’t see any first round quality QBs in this draft. If Webb goes somewhere with consistent coaching and has time to develop he could eventually be a decent NFL quarterback but I don’t see it in Pittsburgh.