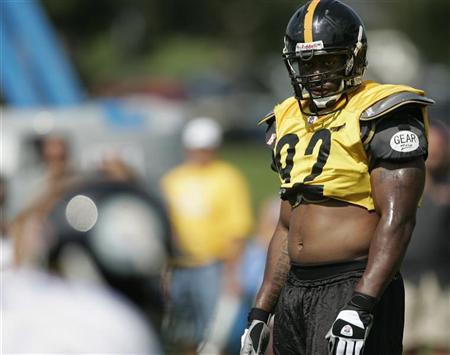 There hasn’t been a player on the Pittsburgh Steelers defense with double digit sacks since 2010.  James Harrison racked up 10.5 sacks and his partner in crime LaMarr Woodley had 10. It has been six full seasons since we’ve seen great production from an outside linebacker.

The Steelers have spent high picks on outside linebackers since the departure of Woodley and the sudden retirement of Jason Worilds, who was on the cusp of a second contract. Jarvis Jones was a huge disappointment and we are better as a team with him in a different jersey. Bud Dupree and TJ Watt are both first round picks who are tasked with proving they can help bring back the fearsome ‘Pittsburgh Defense’ mentality that would strike fear into offenses. Who will be the next outside linebacker to step up into dominance?

Harrison is 39 but is as strong, or stronger than an ox. Harrison, bless his heart, is still around but has averaged just five sacks the past three seasons in black and gold (5.5, 5, 5).  With upcoming talent, the Steelers will likely limit Harrison’s snaps and have him help along the future talent. Aside from being a striking fear as a pass rusher, the seasoned vet is also reliable against the run. We know what Deebo can offer and we can expect around five sacks for him this year.

Alvin ‘Bud’ Dupree is a lock and is hoping to pick up where he left off at seasons end in 2016. Dupree started four games and ended up racking up 4.5 sacks. I think Dupree hits or exceeds double digit sacks in 2017, if he can stay healthy. I broke down Dupree’s sacks in 2016 in an article, which can be seen here. The Kentucky product needs to show he can win from the edge, beating tackles and developing a signature move along with a counter.

TJ Watt is a first round pick who will likely see a lot of snaps with the 1st team in camp with Harrison not needing the reps. The Steelers should push the rookie to learn a lot from the vets. A clear lock.

Anthony Chickillo started seven games for the Steelers and recorded 2.5 sacks and 19 tackles. Not starter material, but a guy who the coaching staff likes a lot. In my opinion he’s a career backup, which is good for a sixth round pick. Chickillo is weak against the run and needs to show improvement. Expecting five outside linebacker spots, Chickillo needs to have a good camp to assure his spot on the roster.

Arthur Moats started five games in 2016 and recorded 3.5 sacks. Moats’ play fell short of expectations last season and was demoted for Chickillo. The Man Of The Year candidate is scheduled to have a salary of 2,250,000 in 2017 and not playing very much, his contract might hinder his chances enough to push him out of Pittsburgh. Moats played inside linebacker with his time in Buffalo and he might need to attempt a move there to save his career.

Keion Adams is a 7th round pick selected by the Steelers with upside. Adams needs to flash in camp and show he can get to the quarterback. He is an athletic guy who can play special teams while adjusting to a new environment and a higher level of talent. The biggest knock on Adams is his ability to set the edge against the run.

On the Bubble: Farrington Huguenin

A one year starter at Kentucky that appeared in 26 games. Huguenin is a camp body with upside to head to the practice squad if he shows some qualities that Joey Porter will advocate for. Had a good Pro Day: 34-inch vertical and 10-foot-2 broad jump.

Significant Question(s):  Will Arthur Moats move to inside linebacker? Which of the probable players mentioned above will separate themselves from the others? Will the Steelers keep six outside linebackers? Does Farrington Huguenin do enough to make the practice squad?

I am psyched for Bud Dupree this year and cannot wait to see his progression and impact. I admittedly was not as excited as most about the Watt selection, but I am curious to see if he has worked on his weaknesses in the off-season. I have no doubts about Watt’s work ethic, he should have a good camp. I think Chickillo makes the team based off of potential and experience. One of my dark horses this year to make the roster is Keion Adams. With a good camp, I think upside and special teams ability, along with coming very cheap will give him the edge over Moats. 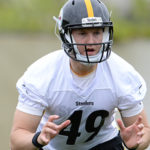 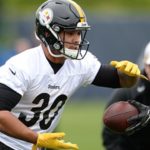