Reaction to Tomlin Presser is Laughable 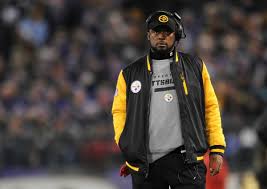 Pittsburgh Steelers’ Head Coach Mike Tomlin will learn his fate today just 24 hours after one of the most contrite and transparent moments in his seven seasons on the job.

At his usual Tuesday press conference, Tomlin spent the first 20 minutes explaining his actions on Thanksgiving night and then answered questions from reporters.

I found it amazing how reporters found Tomlin ‘human’ for the first time in one of these conferences.

He had no choice to be anything but and if you think he is going to be this way in every press conference from here on out then I have a bridge to Ireland to sell you. If you think he didn’t speak with at least one person with the last name of “Rooney” prior to this presser than I have another bridge from California to Russia you might be interested in as well.

Tomlin’s job each week is to update the media on his thoughts about his own team as well as the opponent his team is facing. Nowhere in the description does it say that Tomlin must be “human” or “highly animated.” I’m pretty sure he’s already human.

Something tells me that Tomlin hates doing these things more than reporters hate covering them. He would rather be doing the things that prepare his team for the upcoming game rather than having to discuss them.

It’s all part of the gig however and if Pittsburgh reporters think they have it bad perhaps they should cover New England.

I found the comments wishing he were “more like this” to be laughable. Let’s remember he’s a football coach and not an entertainer. If you want entertainment then go to Dallas and watch Jerry Jones hi-jack pressers on a weekly basis.

Tomlin Gets His Medicine; Steelers May Get a Dose Too