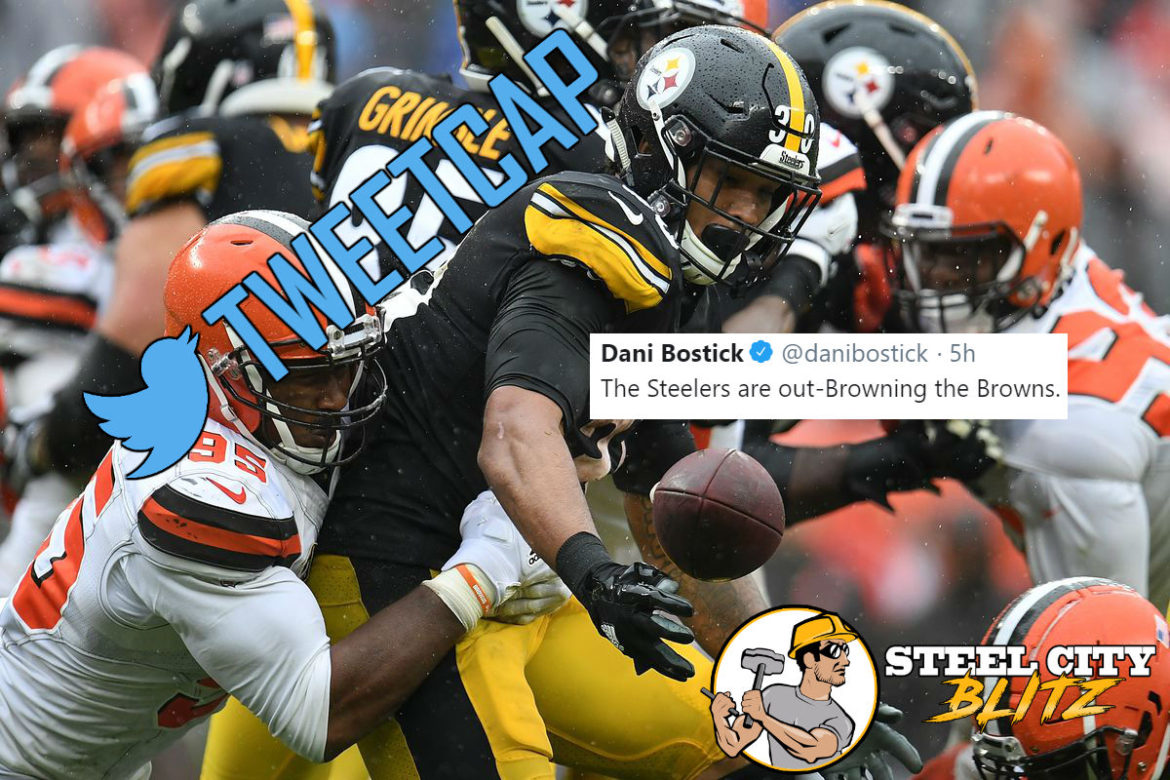 In a scene out of some post-modern apocalyptic disaster movie, the city of Cleveland was hit by a mix between a monsoon and tropical storm. Rather than moving the game until Monday, the NFL decided to proceed with a 1pm Sunday start and play the game while Noah built an ark in the parking lot. There was a lot of hope and optimism coming into this one, which got slowly drowned in the downpour off Lake Erie. Here is the first Steelers Tweetcap of the season with the best tweets from the game.

Everyone was excited to have the Steelers back.

The Steelers came out early feeding the rock to James Conner.

Horrible, terrible penalty called on Watt. Taylor spins away from pressure. Watt barely grazed him. The NFL is going to implode if those start getting called. Watt had no chance to pull out of that. #Steelers #dkps

Tyrod Taylor with the Oscar.

The Steelers drove into the red zone but Ben threw an interception.

Ben: What did you see?
Dobbs: You threw the ball into triple coverage.
Ben: I miss Landry.

Cincinnati found a way to have a player get ejected in the first 10 minutes? Shocker

Conner with a MASSIVE hole to run through. Immediately seeks out each and every member of O-Line to hug. Message.

Sean Davis intercepted a pass, but there was a penalty (big surprise).

Welcome to the 2018 Season of the National Refereeing League

Omg these freaking refs are way to involved in this game.

Ben threw another pick, this time on a horrible mis-fire on a deep ball.

What the hell was that? Damarious Randall with the INT on a deep, deep ball to AB.

The Conner train rolled on

James Conner already has 58 yards offense and a catch and run of 15 yards, which was longer than any play LeV Bell had in season opener last year in Cleveland

But Ben couldn’t buy a completion, as a ball went right through Jesse James’ hands and straight to a defender.

That’s not on Ben. James HAS to catch that

Third interception of the game for Roethlisberger. This one on Jesse James. Went off his hands.

Two rookies who are supposed to protect Tyrod Taylor and pick up blitzes (LT Desmond Harrison and RB Nick Chubb) are getting him killed. He’s been sacked three times already. #Browns

Including today, Ben has thrown at least one pick in 7 of last 9 road games. #NotJoking

The Steelers held a 7-0 lead at halftime, but unraveled at the start of the third quarter.

Artie Burns looses his mind..maybe double penalty .then gets into it with Todd Haley #PITvsCLE

Two things on that series: Hargrave's defensive holding call gave the Browns life. Burns' ridiculous overreaction to a clean block ignited them and sent his teammates into pandemonium. #Steelers

But the offense came alive with Ben hitting JuJu on a crossing route that he took all the way down inside the 5.

Thoughts and prayers to all the old guys who hate JuJu

The Steelers had 2 touchdowns nullified by penalties but finally connected on a back-shoulder throw from Ben to AB.

Third time is a charm

And-goal for the Steelers at the 22 yard line and, touchdown for Antonio Brown.

Ben Roethlisberger was barking at the ref after that touchdown pass. Teammates had to move him back. Clearly upset by the two previous penalties.

Said it before, I'll say it again:

Antonio Brown is the most consistent skill player I can remember since my rookie year in 2001.

Browns were going to give up a touchdown there come hell or high water. They would not be denied.

TJ Watt had a monster game.

TJ Watt is doing a pretty good impersonation of his brother.

At this pace, TJ Watt is gonna have double-digit sacks by next week. He seems to rise to the occasion against this team #Steelers

James Conner scored again to put the Steelers up 21-7.

So… James Conner is good at the foosball

Maybe Le'veon was helping the team by holding out

#Steelers RB James Conner (@JamesConner_) is over 100 rushing yards for the first time in his NFL career:

What was that play? Not familiar with it.

Not a good weekend for punters from Pittsburgh

Under the radar storyline that shouldn’t be lost today: Jordan Berry ain’t exactly having a great game.

Peppers fumbled the ball as he was being tackled and it went out of the end zone but on review they claimed he was still in contact with the ball when his foot hit out of bounds at the 1 so Cleveland kept the ball.

Officiating crew in #PITvsCLE gonna have a lot of explaining to do when they get the film review of their performance. They've been equal opportunity egregious all afternoon.

According to this year's former official getting paid way too much to make rules way too confusing, it was a fumble, but since the player who fumbled the ball was out of bounds, so was the ball. Let's just ignore the fact that makes absolutely NO sense.

TJ Watt is still good though.

THANK YOU TJ WATT FOR SHOWING UP

But the Browns would score on a sideline pass to Josh Gordon to tie the game with 2 minutes left.

PAT is good. Browns tie the game. Steelers will get the ball with 2 mins left in regulation. #HEREWEGO

Joe Haden's hamstring injury looms large there. He likely would have been on Josh Gordon there.

Steelers playing scared right now — like a team that now believes they might lose to a 1-31 team.

The Steelers punted back to the Browns and played defense like idiots, trying to run in subs with the Browns in a no-huddle hurry-up offense.

Why are the Steelers running out defensive subs against a no huddle offense?

Thankfully, Cam Sutton stepped up and picked off a deep ball.

what can #Browns do for you?

All the Browns needed was 10 yards for a field goal, and Tyrod Taylor threw an interception to Cameron Sutton.

Overtime. Watt got his 4th sack, the 6th Steeler ever to do that in one game.

TJ Watt AGAIN. 3rd and 11 after his sack

Somehow, tying the Browns seems even worse than losing to them.

But Boswell missed from 42 yards out to win the game.

This has got to be the game from hell……

After a Browns punt, the Steelers got it back but Ben was strip-sacked and the Browns recovered.

But, guess who, TJ Watt stormed through the line and blocked the Browns field goal with 10 seconds left!

That is exactly how this game deserved to end. #Steelers pic.twitter.com/mkSvKqBDvA

THIS IS THE FUNNIEST FOOTBALL GAME OF ALL TIME

The game ended in a tie. Which some say is like kissing your sister. I’m an only child though, so I can’t confirm or deny that.

#Browns improved their record from a year ago by tying their game in Week 1. Unbelievable

That is a legit embarrassment.

The most Brown’s thing that could’ve ever happened!!

It may go down as a tie, but the #Steelers lost this game.

The Browns and Steelers tied. All the hot takes from the past few weeks on both sides just imploded on themselves and formed a black hole.

My daughter threw up the entire second half. I think she speaks for all of us.

Never heard some many people happy for a Tie. pic.twitter.com/EelZLsAp8k

Up 21-7 halfway through 4th…it’s not easy to blow a lead like that. They just stopped playing. Horrible.

Ben terrible. Maybe it would’ve been a decent idea to get him some work in the preseason ?

Tomlin’s teams have a way of keeping the other team in it.

— Renegades of the Rotunda (@pghrenegades) September 9, 2018 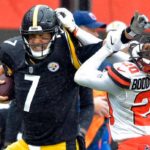