Let’s Just Get It Over With and Ban Football 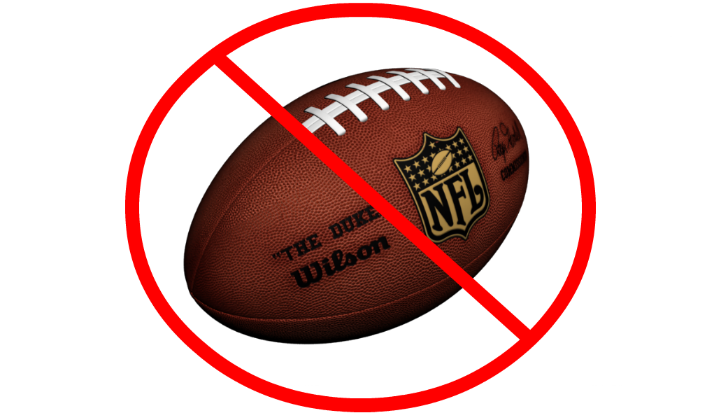 No one can beat a dead horse like I can and I really don’t know how long I’ll continue to beat this particular equine but I have a feeling I’m far from done.

Every week we football fans are reminded of the things related to the game we love that are killing it. We are reminded of the NFL’s poor handling of head trauma and now it’s intent to cover it up. We are reminded of every player who has died in recent years because there’s “always a link to CTE (chronic traumatic encephalopathy)” and we are constantly made aware of “DeflateGate” and Tom Brady. Add it all up and you have stuff most fans are tired of hearing about.

Several items related to CTE and the violence of the game came out just this week. The first is that the NFL tried to skew research of brain injuries to make the problem look “not as severe” as we now know it is. Secondly, we’ve been told that former Hall of Fame defensive player Bubba Smith suffered from CTE at the time of his death in 2011 and lastly were the comments made today by Buffalo Bills’ General Manager Doug Whaley.

“This is the game of football,” he told WGR 550 radio. “Injuries are part of it. It’s a violent game that I personally don’t think humans are supposed to play.”

Humans aren’t supposed to play football??? Keep in mind this is coming from a guy whose job is to fill the roster with football players… I’m not sure how confident I would be knowing my GM felt this way. Does he have a point? Sure he does but then again I don’t know that people were supposed to drive cars 200mph or learn martial arts either.

In the case of Bubba Smith, does it surprise any of you that he suffered from CTE? Maybe the better question is when is the last time you heard of a former NFL player dying and he DIDN’T have CTE? Funny how you never hear of those guys isn’t it? We know football is a violent game and injuries and head injuries are a major part of the game but let’s stop acting like we are surprised when these injuries or these results happen.

The last of my dead horse lashings come against Tom Brady and Deflategate. Do you realize this thing has now gone on longer than most celebrity marriages? Heck, a guy spent a full year in space and that still isn’t as long as this ‘disease’ is. There are now some legal pundits who are suggesting that Brady could take this all the way to the Supreme Court.

Ya, that’s exactly what the Founding Fathers had in mind when they created “a supreme court to rule over the legal issues of the new country.” Can you imagine? “Hey Ben, there wasn’t enough air in our ball today.” “Well Mr. Madison I guess we can sue over that!”

I have said since day one and will continue to say that Brady will never miss a game and at this point my mind is already made up about him, his coach and his owner and a four-game suspension isn’t going to change that.

My solution to all of this is just to ban the game football. Our society has become soft and therefore it reflects in our sports as well. Let’s just go play soccer (check those concussion numbers!) and lacrosse and baseball because those sports are less violent. Banning football would also give us more to do on Sundays and we wouldn’t have to hear anymore about Tom Brady or which young player retired early or how bad of a commissioner Roger Goodell is.

Let’s just ban it and then that way I can finally stop beating this dead horse and move on to the next one.

Let’s Just Get It Over With and Ban Football was last modified: May 24th, 2016 by steeldad
Bubba SmithCTEDoug WhaleyNFLRoger GoodellTom Brady

No Way No How. Without Football on Sunday’s there would be no point in watching other sports or for that matter doing anything else in life. Football runs this country no 2 ways about it. Yes there are worries about head injuries but a wise man once said “these guys knew what they were doing when they signed up for it”. No doubt it’s a dangerous game but the players know what there doing and to be honest head injuries are never going away but can they lessen the blows of head injuries and try to make the game safer knowing full well that you can’t completely avoid it at all.