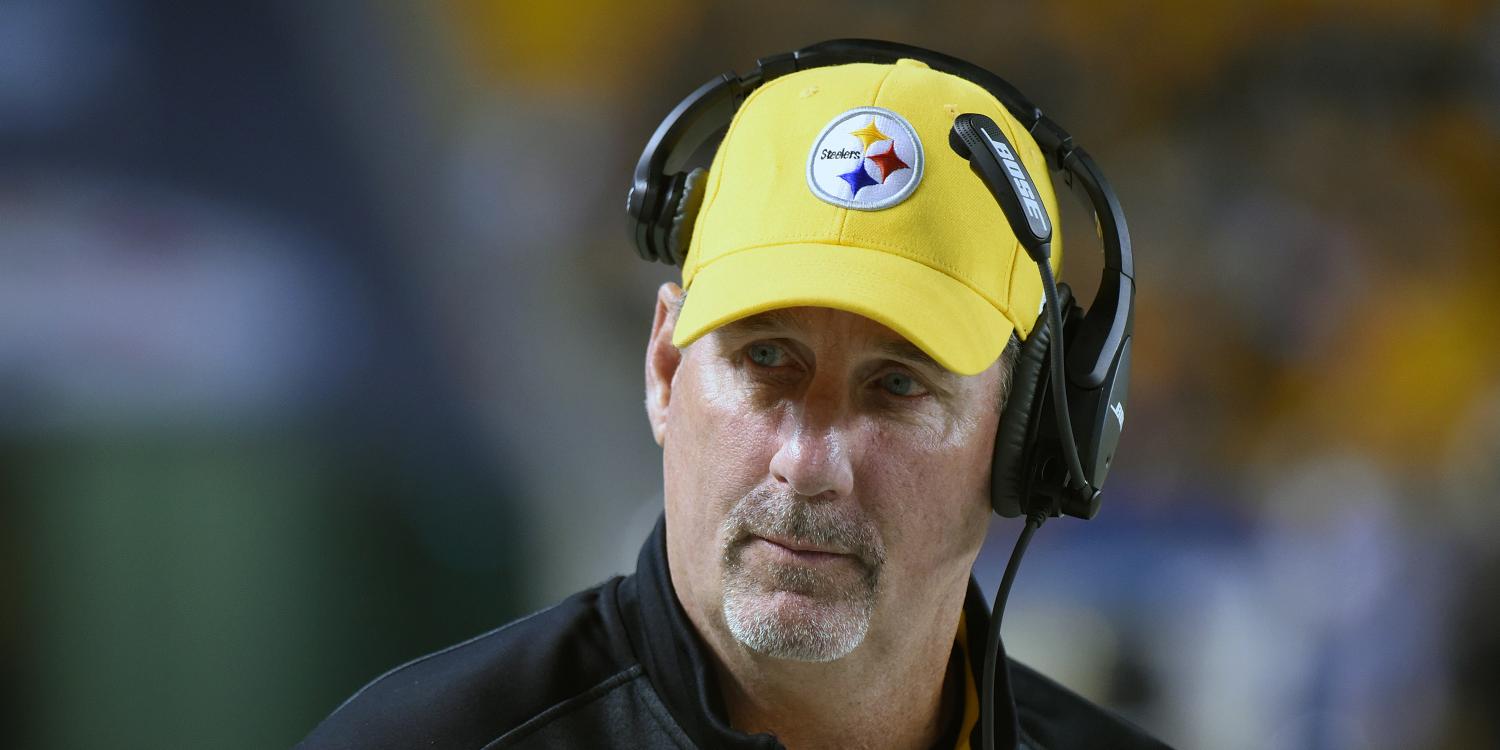 Before I get too far, Pittsburgh Steelers’ Defensive Coordinator Keith Butler is not going to be fired in-season. That’s something the Steelers just don’t do so I’m not suggesting that. However, I am suggesting that I believe his job is in serious trouble for the 2017 season unless things turn around quickly.

The Steelers wake up on this Monday morning looking at a two-game losing streak and while both sides of the ball (and injuries) take much of the blame, the defense finds itself in a position that is far from normal in the Steel City.

Right now the Steelers rank 28th in overall defense. They are giving up almost five yards per carry and they rank 29th against the pass. To make matters worse they are on pace for just 18 sacks all season long and have recorded just three interceptions. This just isn’t going to get the job done and if it doesn’t improve, no amount of offensive firepower will mask the issues on that side of the ball.

My personal opinion is that Mike Tomlin made a mistake when Dick LeBeau was let go following the 2014 season. What Tomlin should have done was make his move to the 4-3 defense he ran as defensive coordinator in Minnesota. Instead, he has allowed Butler to continue running the 3-4 while incorporating several principles of the cover-2 which he picked up in Tampa Bay from Tony Dungy. Because of this, I think it has forced them to use players in positions they really weren’t made for and it has also affected how they draft.

Some of that is just bad luck. The tape on Senquez Golson was very good out of Ole Miss. Had he been a few inches taller he may have been first round material. The problem is that he has not seen one play of an NFL game yet due to injury. Ryan Shazier hasn’t been much different. When he plays, he’s a difference-maker. That hasn’t been on a very consistent basis however. Again, due to injury.

Jarvis Jones and Bud Dupree have yet to become the edge rushers the Steelers thought they would be and it appears they aren’t getting much in that regard from anyone else.

We’ve also seen just how poor the defensive line is without Cam Heyward. That lack of depth and development may not be on Butler 100% but he’s the one driving the bus. Well, at least we believe he is. I’m told that in recent weeks, Tomlin has gotten “more involved” with the defense than at any time in his tenure with the Steelers. We know he’s been involved with the secondary  but as far as the entire defense that hadn’t been the case.

I don’t put the entire defensive mess on Butler and one reason why is the lack of blitzing in recent weeks. I think that has more to do with Tomlin than it does him. Remember, this is a guy who learned under the father of the zone blitz so it seems quite odd that he wouldn’t use it more often regardless of the opponent.

Whether Butler takes the fall in 2017 is up in the air right now because there’s a long way to go -nine games to be exact- so I’m not going to going to go any further than I have. A healthy Shazier and Heyward could help quite a bit. Still, I think Tomlin wants total change and a sagging defense this season could be the prelude for it.

Alright Marc since were making suggestions I have a few that can help the offense. Why not play an I-Formation offense for the whole game or what about 2 backs, 3 TE’s and 1 WR offense would that help out the Steelers or wait I have the perfect offense for the Steelers the WILDCAT.
Yeah the wildcat is the perfect offense for the Steelers to run.
I am sick of hearing about making the change to the 4-3. Why move 1 of the OLB’s to basically an ILB spot in the defense? Yeah the Defense right now isn’t playing well but guess what I didn’t expect to be great this year and neither did you so to suggest that Tomlin should have gone to a 4-3 Defense is quite possibly insane and foolish but I know what your going to do when I get with this rant of mine. You will respond by showing me how the 4-3 Defense can actually make a difference in how they attack there opponent and how to gameplan as well and it will be a great attempt on your part but a crazy attempt as well.

Good evening Vittorio. I would like to start by saying it is not my intention to show you whether the 3-4 or 4-3 works better. My point is that Tomlin has left the defense in limbo. Besides swinging and missing on draft picks and suffering from some untimely injuries, the D has no identity. I believe Tomlin erred in not just going all-in rather than trying to keep the 3-4 or elements of it. I don’t care what D you run just get the right personnel and the right guy running them.
As for the 3 TE, I formation, let’s take it a step further and just go all in on a full house backfield. Nix at FB, Bell and Brown at halfback.

Hahaha!
I have to admit it. Vic. Your posts amuse me. They’re funny.
2 backs, 3 TEs and 1 WR, huh? Ok, sure. Which offensive lineman are you going to remove from the formation to get down to 11 guys?
The Wildcat? Really? That’s too silly to make it even worth addressing.
And last but not least, going from a 3-4 to a 4-3 involves moving an OLB to an ILB spot?
You have no business calling anyone insane or foolish. It’s painfully obvious that you don’t understand football concepts. In fact, based on this post, it would appear that you don’t even watch.

Really Ben cause I’ve seen how the 4-3 works. Your basically wanting 4 down linemen to generate pressure and allow 2 of your 3 LB’s to attack the QB or possibly only having 1 LB rush the QB. So my math was off by 1 person so I’ll rephrase that formation to 2 backs, 2, TE’s and 1 WR. You want the Defense to get better then focus on beefing up the DL and OLB spots and stop trying to fix the secondary but as usual most fans would rather it be the opposite Fix the secondary and leave the DL and OLB’s alone. There’s a reason why guys like Pat Peterson, Richard Sherman and Marcus Peters succeed in this league and it’s not just there talent it’s the freaking front 7 that does bulk of the work yet for the life of me I can’t seem to understand why most fans want the DB problem fixed first. If all those CB’s I mentioned had no help from the front 7 how exactly would they fare? I know fans are fed up with the secondary as am I but drafting CB after CB after CB is not going to fix the problem nor is yelling and screaming and blaming Carnell Lake the answer either. Think back to all years the Steeler Defense was successful what was the strength of that team? It certainly was the secondary cause outside of Ike Taylor show me 1 other CB on those teams that you would consider any good these days. You had guys like Aaron Smith, Chris Hoke, Casey Hampton, Kendrell Bell, Joey Porter, Lamar Woodley and others who all played on that front 7 that made that D so good. Why do you think I kept badgering for 2+ DL in the draft this past year? Now I’ll admit I was wrong about Jarvis Jones but at the time I felt he would become a 7+ sack guy and I was wrong about that. So why is it so hard for the other Steeler fans to admit that you can’t fix the secondary and move on from it?

I’m not sold on Butler but I’m also not sure I want him fired. I think this team’s window is MAYBE 2 years after this one, and new systems take about that long to fully be installed. We saw with Todd Haley the change was a good move but it took a couple of years to see it really work.

I’m not sure I’m willing to take that kind of step back while we have Ben, Bell, Brown, Martavis, Coates, Green, Cam, Shazier, Tuitt, etc under contract. The team is going to have to make some tough decisions over the next few years with guys like Bell, Bryant, Tuitt, and Shazier being guys that could demand big money on the open market. Chances are they don’t all return.

I want to see this defense with Cam, Tuitt, Shazier, and Dupree all on the field together and healthy.

Also, if you’re going to fire Butler, I think I’m only on-board if you’re getting a well respected name coming in… Todd Haley and Mike Munchak were guys with excellent credentials in the NFL at the coordinator levels.

If someone like (gasp!) Rex Ryan, Chuck Pagano, or Gus Bradley were fired and open to coming here? Then I’d consider it… but if we’re talking about promoting someone like John Mitchell? I’ll pass.

Rex has said if can’t cut it with the bills he’s done with coaching so that’s a no. Pagano is just dyeing in Indy and the same can be said of Bradley but be honest Steeler fans if 1 of those 2 guys came available sure they would have there own ideas on D but that would take to implement and why waste more years of Ben’s career. Look give Butler 1 more year and if can’t make the corrections to the D then I will join the majority of you who would want him it out so until then relax and stop complaining. This team is missing Heyward and Dupree 2 guys who helped generate pressure and were key elements in the Steelers having 48 sacks last season. Now as for Golson here is someone who has bad luck with health. 2 years of NFL career is gone and 1 must wonder and I’m sure you guys would back me up on this: Is Golson ever going to see the field?