I Don’t Think Charlie Batch is Done Just Yet 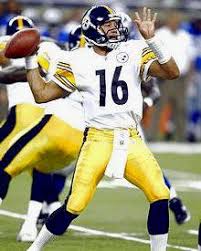 Many of you won’t want to hear this for a variety of reasons but I’m going to say it anyway. I don’t think Charlie Batch is completely done yet with the Pittsburgh Steelers. I understand that you want nothing to do with a guy who is closer to his AARP card than his rookie year, but take an objective look at things and you’ll see where I’m going.

Yesterday on my weekly appearance on Trib Live Radio with Daniel Dudley, he brought up the fact that Batch’s playing days might not be over just yet and I completely agreed.

First of all, who is to say that Bruce Gradkowski just steps in immediately and becomes the number two quarterback? At 30 years of age, Gradkowski has been around the league a time or two and has proven he can pick up offenses of different coordinators but does this automatically promote him to #2 or even #3?

Secondly, because Landry Jones was a quarterback at a big time program in Oklahoma, should we assume his youth, ability and smarts will translate to the pro level making him a clear favorite to be on the roster as the back-up or emergency QB?

Big 12 quarterbacks have a very up and down record recently of professional success. For each Robert Griffin III there is a Graham Harrell and for each Ryan Tannehill (jury still out) there is Blaine Gabbert. The point is, with any rookie quarterback regardless of where he may be from, there are few ‘sure things’ in terms of success.

Third is the potential for injury. It was just last year of course where Byron Leftwich replaced Ben Roethlisberger and immediately got hurt. This of course ushered in the return of Charlie Batch who led the Steelers past the eventual Super Bowl Champs in Baltimore.

The wild-card of course is John Parker Wilson who could come into camp and shock everyone with his ability to play and pick up the offense. I don’t expect this to happen but you can never rule it out.

I have no doubts whatsoever that the Steelers have told Charlie Batch in no uncertain terms to keep himself as ready as possible. Remember, this is the Steelers we are talking about and no team loves its’ veteran players like Mike Tomlin and the Steelers do.

I’m not saying in any way, shape or form that this will happen because I hope it does not and it’s still a long-shot right now. The back-up QB position must get younger and that needs to happen yesterday! My point is that we cannot rule it out for a game, maybe two should the injury bug hit the Steelers again at QB.

If it does happen, I hope the young guys in the locker room are ready for lots of ‘Wheel of Fortune’ and ‘Matlock’ re-runs.

I Don’t Think Charlie Batch is Done Just Yet was last modified: May 7th, 2013 by steeldad
Ben RoethlisbergerCharlie BatchPittsburgh Steelers

So Just How is Sean Spence Doing? Don’t Ask the Coaches

Ryan Clark is a Perfect Example of Today’s Athlete

Steelers Would Be Wise to Leave Harrison,...

Steelers 2013 Schedule is No Turkey

Possible Draft Options at RB for the...

I think Landry Jones is a lock to make the roster as the #3, really regardless of how he looks. Gradkowski would be more likely to get, I think… I think it’s highly unlikely that Batch gets a chance to beat out Gradkowski… but it’s possible.

To me, injury is really the only thing that would save Charlie (and even then they’ve seemed to favor Leftwhich for whatever reason).

I’m totally fine with my last memory of Charlie being taking down the Ravens in Baltimore… that was awesome.

I believe it’s unlikely as well, but I do believe they have moved past Leftwich and Charlie would get the call ahead of him should something really bad go wrong with the QBs.

Oh come on now!!!! Every year the Steelers seem poised to move on from Charlie and every year he shows them that he is a viable backup. The Steelers went with Leftwich a couple of years back then last year in moves that I TOTALLY disagreed with. They went with two old vets last year instead of what I believed to be best option (i.e.a young quarterback and Batch) and now this year they are going in a totally opposite direction (i.e. 2 younger quarterbacks). I too believe that Batch has a lot of football left in him. On top of that he has been a viable mentor for Rothesberger and could be for one of the young quarterbacks as well. Every year the Steelers seem to be steering away from the obvious (i.e. Batch belongs on the team). Its time that they accepted the obvious for once and ran with it.

Rick…..Well said. In my opinion you are absolutely right. I think Charlie Batch has a lot to offer the Steelers team even if he is not playing.

I honestly don’t know how much Charlie has left to offer but my point was this; the Steelers like veterans and they like continuity. Batch fits both of those bills. I know a lot of people like Jones but he is an unproven commodity. And we all know injuries can hit this position in a heartbeat.

I love Charlie! Plus he is great for the Pittsburgh community!!!! He is a great humanitarian!!!!!

[…] be remiss if I didn’t mention Charlie Batch. As I wrote earlier this offseason, I believe Batch will be a phone call away in case something happens to either Roethlisberger or […]

[…] of quarterbacks, Steel Dad on the Steel City Blitz blog said that he doesn’t think Charlie Batch is done just yet.  He looks at the potential for injury at quarterback and the inexperience of the other […]