How the Steelers Butchered Clock Management in Crunch Time 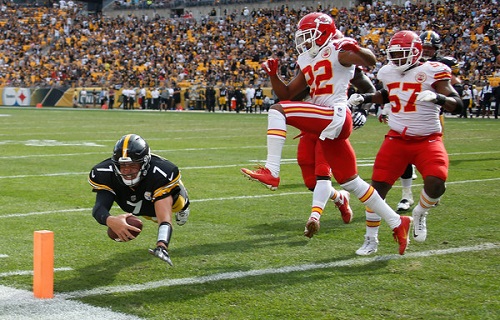 For everything that happened with the Steelers over the first 55 minutes of football between the Steelers and Chiefs, an opportune turnover presented the Steelers with a ray of hope in the final five minutes. Kansas City’s offense looked unstoppable all afternoon, but a fumble recovered by Anthony Chickillo gave the Steelers the ball with 5:03 left on the clock down by a 42-30 margin. At this point in the game, field goals do no good. A 12-point deficit requires two touchdowns to win the game. The Steelers had been successful earlier in the game working out of a no-huddle offense so the need for urgency in this situation – to get two scores in the last five minutes – should have put them right in their comfort zone of the no huddle. There was a lot of talk in the offseason about whether Randy Fichtner would “take the reins off” and let Ben run more no huddle during the season. This was the opportune time, and the Steelers butchered it.

The first play was a great success. Ben hit Jesse James on a wheel route down the sideline who took the ball all the way down to the 20 yard line and got out of bounds. With the clock stopped, the Steelers had 3 timeouts in their pocket and only 20 yards to go to get their first of two needed scores with 4:52 left in the game. Somehow, it took the Steelers nearly 3 minutes to cover those last 20 yards and get the ball in the end zone.

After an incomplete pass on first down, which Ben tried to force to a triple-covered Antonio Brown and was nearly intercepted, Ben hit JuJu over the middle on second down. JuJu was tackled with 4:42 remaining on the clock, setting up a 3rd and 3.

From there, the Steelers went into their “muddle huddle” with Ben standing close to the O-line and calling out a play. It took approximately 15 seconds for the Steelers linemen to get to the ball and the receivers to get on the correct side of the field. Ben had to signal James Conner to move out to wide split position at this point.

Incredibly, with the Steelers down by two scores and facing a third down, the ball was not snapped at this point. Another twenty seconds ran off the clock before the ball was actually snapped. Ben took his time to survey the field and call out an audible to the receivers on the left side of the formation. The Chiefs did not show a lot of movement on defense here that necessitated a long pre-snap wait. Given that Conner still went in motion after the offense got set, we can say there are at least 15 wasted seconds here between when the offense got set and when the ball was snapped.

The third down play resulted in an incomplete pass for JuJu in the end zone. In the route combination, only two players actually ran past the first down sticks. James Washington ran a short hook, Vance McDonald whiffed on chipping the defensive end then ran a shallow cross. James Conner from the wide position ran a slant route against a cornerback and was blanketed. The only two receivers past the first down line were Antonio Brown post route where he was double-covered and JuJu running down the seam, who Ben overthrew in the end zone.

On fourth down, Ben went back to JuJu on a crossing route to pick up the first down. The pass was caught by JuJu going to the ground, and the 4th down play was essentially over with 3:58 remaining in the game. At this point, the Steelers now had the ball first and goal from the 6 yard line down by two scores and it would still take them two full minutes to get the ball in the end zone.

After the fourth down conversion, it took the offense 20 seconds to get through their “muddle huddle” and get in position to line up for the play. The fourth down play was snapped at the 13 yard line and was a gain of seven yards. It wasn’t like the Steelers had receivers 40 yards downfield that had to run back to get onsides before the snap could happen. The players were all in relatively close proximity to the new line of scrimmage and it still took them 20 seconds to get set.

Even after the offense was in position for the ball to be snapped, another 10 seconds ran off the game clock before the ball was actually snapped for the first and goal play. If you look at the prior screen shot and this one, the offensive and defensive players are all relatively in the same position. For those keeping track at home, this is now 25 seconds that have run off the game clock for no apparent reason.

The first and goal play was an incompletion into the end zone where Ben had to rush the throw because of pressure up the middle. The second down play began with 3:24 on the clock and was a check-down pass to James Conner. The Chiefs did a good job blanketing the Steelers downfield receivers to leave Ben with only the check-down option. Conner plowed to the 1-yard line and the linemen came in to try to push him across the plane, but to no avail. Despite whistles blowing a few seconds earlier, this play was for all intents and purposes over with 3:16 on the clock.

Inexplicably, the Steelers decided to huddle up and call a play with the clock running. This was not shown on the broadcast but certainly had the fans in the stadium screaming to hurry up. There was clearly no sense of urgency as the play call sent AB in motion which took a few more seconds before the ball could be snapped, which did not occur until 2:46 on the clock. This took 30 full seconds from the time Conner was tackled to snap the ball on the next play. Once again, zero urgency from the Steelers to get the ball in the end zone.

The play call was for the pitch play to JuJu that the Steelers had run earlier in the game. This play has been in the Steelers playbook for ages. Credit to the Chiefs defense and in particular Justin Houston who read the play tremendously. Rather than following AB coming across the formation or going with James Conner out of the backfield, he held his ground and was able to get a free hit on JuJu. To make matters worse, Ben had plenty of time to throw and with Houston peering into the backfield, could have lobbed one to James Conner for a walk-in score rather than hitting JuJu in the middle of the field.

JuJu was tackled with 2:43 left on the clock. At this point, it had taken the Steelers 2 full minutes to go 10 yards since the prior 3rd and 3 that they were in at the 13-yard line. Remember, the Steelers were down by two scores here and needed to score as quickly as possible in the hopes of getting their offense the ball back with some time on the clock.

Not only was time becoming more urgent and the crowd was growing in consternation. The offense huddled up once again for no good reason. From the time it took the Steelers to go into a full huddle, then break the huddle and line up took 29 seconds off the clock after a play that resulted in a two-yard loss. This is inexplicable and inexcusable. It’s not as if the Steelers have a rookie quarterback or someone who does not know how to function in a hurry-up offense. The lack of urgency was stunning and cost the Steelers a chance to win the game.

Even after the Steelers got lined up, the play call had Antonio Brown come in motion into a stack in the slot, so another 6 seconds elapsed off the clock. The ball was finally snapped with 2:08 left in the game. The play took a long time to develop and ended with Ben running the ball in from 3 yards out for the score with 1:59 remaining.

The Steelers wasted an extraordinary amount of clock time traversing the last 20 yards to get into the end zone after Jesse James’ big catch. With the game on the line and needing two scores, it took three full minutes to go 20 yards and score. To make matters worse, the Steelers scored at the two-minute warning which meant the defense could not take advantage of the “extra” time out. The Steelers were able to preserve all three of their timeouts to give their defense a chance, but the offense blew the situation by taking too long to get in formation and snap the ball. The worst came in the last two snaps where the Steelers went into a full huddle twice, taking 30 seconds and 31 seconds from the end of the prior play until the next snap. Even if they had taken half of that time, it would have given the defense 30 more seconds and the two minute warning with which to operate. Add on to that the 25 seconds that the Steelers had previously wasted in the 4 downs it took to get from the 20 yard line inside the 10, and it’s nearly a full minute that the defense could have had.

While the defense did allow one first down to the Chiefs on the ground when they needed to come up with a stop, the Chiefs set up to punt with 11 seconds left in the game. If the Steelers had showed more urgency, the defense could have taken the field with 3:00 left in the game rather than 1:59 remaining. With 3:00 remaining, even if the Steelers had saved their timeouts, the Chiefs would have had to run at least two plays before the stoppage at the two minute warning. As it happened, the Steelers offense wasted so much time, the defense was forced to come up with a stop in order to give the team any chance of winning. The defense did not produce that stop then got called for a roughing the kicker penalty which ended the game. Ben is in his 15th NFL season and has started over 200 regular season games. At this point in time he should have a better sense for the situational football of score and time and be able to operate the hurry-up offense with more urgency that does not require huddling up with under 3 minutes to play when trailing by two scores.

How the Steelers Butchered Clock Management in Crunch Time was last modified: September 18th, 2018 by Ian

You’re absolutely correct! As I watched on TV, I kept thinking to myself, “My GOD but they’re awfully casual for a team losing by two scores. The plan MUST be to kick it on-side because they must know they’re leaving the defense no margin at all for allowing the Chiefs a single first down once they get the ball!” This is on Ben, the whole offense, Fichter, and Tomlin. Surely, at some point in camp the offense and coaches had to discuss and practice ‘time-critical’ situational football. I mean…DUH?!!!