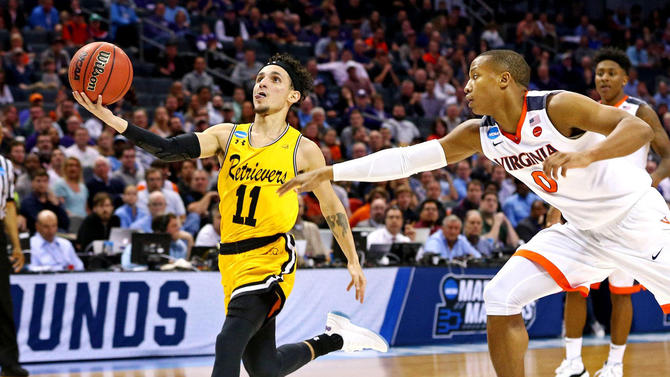 Tonight, UMBC became the first 16-seed in NCAA Tournament history to beat a #1 seed. Prior to this game, 16-seeds were 0-135. UMBC finished second in the America East conference in the regular season, 3 games behind first-place Vermont. The Retrievers made the Tournament by hitting a last-second 3-pointer to beat Vermont in the America East Championship. As a reward, the Committee put them on the 16-seed line and slotted them against the #1 overall seed Virginia who was 31-2 and had the best defense in the nation.

A minute after the game started, former CBS college hoops analyst Seth Davis tweeted one of his famous “sharpie” tweets.

I’m sure that won’t come back to haunt him. At. All.

The first half was typical Virginia basketball. Played at a mind-numbingly slow pace. Virginia scored 21 points. UMBC hit some 3s to hang around and made a shot before halftime to tie the game.

The Retrievers are tied with (1) Virginia at the half! #MarchMadness pic.twitter.com/dcZgoOeVUM

Yes, tell me more about history.

Thomas Jefferson is looking up at this game in disbelief

The only colleges to make the Final Four in both #chess and basketball are Duke, Illinois, and NYU. (Texas Tech and UMBC can join them this month)

So how do people feel about Virginia?

In fairness, on Selection Sunday, basically everybody said Virginia got a tough draw.

This would be the most Virginia sports thing ever

It's ok, we sell whiteout 😉

Hi Seth, remember when you declared the game over at tip? We are up 14 with 14 minutes left https://t.co/duUviOMvZO

Coming to ruin your bracket pic.twitter.com/o5sfgzPTBN

No exaggeration, this might be the biggest upset in sports history.

Then against the odds, UMBC started to pull away

What if I told you, an early stroke of a pen turned one man’s fun little game into a night of torment and distress he never would have imagined?

Arizona: We want to be on the losing end of the biggest upset in the NCAA tournament this year.

virginia is the worst state in the union. lived there for a year, that state is hell. go umbc

I don't think Jim Nantz has been this surprised since Tin Cup! #umbc @CBSSports

Virginia, the number 1 team in the country, is getting DOMINATED by a 16 seed. I can't comprehend this.

WE ARE ALL RETRIEVERS

When a 16 seed appears in the second round #Retrievers pic.twitter.com/fsnc4LOouK

Virginia is going to have the two most stunning losses in college basketball history:
1982 to Chaminade
2018 to UMBC#MarchMadness

Schadenfreude, thy name is UVA.

No. 1 seeds are going to fall to 135-1 by way of a third-year head coach who was a ball boy for the school he’s beating.

UMBC layed it on in the last minute and stretched the lead out to 20.

Over the #1 team in the nation.

These kids from UMBC are ballin!!!

This is truly magical.

How BIG was this Upset. Consider UBMC was 23 point underdogs to Virginia. UBMC lost 83-39 to Albany earlier season UBMC is FIRST 16 seed EVER to beat a ONE SEED. A blowout to boot. 74-54. #Madness.

Not even caring abut the rest of my bracket, I witnessed history

PUT SOME RESPECK ON IT! WE HAVE DEFEATED NO.1 OVERALL SEED VIRGINIA 74-54

Anyone have any perspective on this?

Tell @SethDavisHoops, who sharpied in Virginia at tip, that we said “sup” https://t.co/50MmnsJJqX

Hey Ian, just wondering where you are at on your brackets? I only did one and i’m still alive 98% on the ESPN bracket challenge.

[…] become the first 16-seed to defeat a #1 seed in the NCAA Tournament when they topped Virginia in epic and hilarious fashion. Vermont has appeared in four straight America East Championship Games. The Catamounts got revenge […]