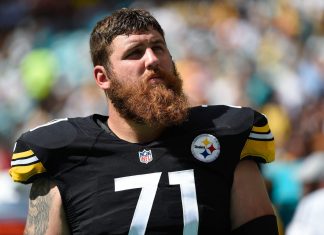 Most of you should know by now that when the Pittsburgh Steelers release their Depth Chart during Training Camp that we shouldn’t take it as gospel. That said, there were a few things to note as the initial chart was released.

We’ve detailed this throughout the offseason and through the early part of Camp but right now Matt Feiler has the job over Chuks Okorafor. This is not overly surprising as Feiler performed so well in 2018. I expect that this contest will continue through at least the first two if not three preseason games.

There are many who believe Diontae Johnson may take the punt return job from Ryan Switzer. To this point, Switzer has that nailed down. He also is listed as the main kick returner as well. Keep in mind that we are still very early in the process and Johnson’s ability in game action could be what Danny Smith is looking for as the preseason wears on.

I actually detailed this this morning in “Quick Hitters.” Matthew Wright has to beat Chris Boswell. He can’t simply do ‘just as well’ and hope to win the job. But remember, this is more about just making field goals and PATs. Being able to place kickoffs or consistently being able to bang them through the end zone is also very crucial. Wright has done nothing to lose this contest but as the incumbent and with his salary, Bos is the favorite.

The Steelers’ starting inside linebackers are listed as Vince Williams and Mark Barron with Bush listed behind Barron. This is not unusual in the slightest. Bush could be the second coming of Jack Lambert and Ryan Shazier combined but he still has to earn that spot. I believe you’ll likely see Bush ease into a starting spot seeing time mostly in speciality packages. Trust me, his time is coming.

This is a big reason why we stress so much that this depth chart is not the be-all, end-all many believe it to be. Mason Rudolph has had a better Camp so far than has Josh Dobbs but until we start to see greater separation, in games especially, this chart positioning is unlikely to change.

I expect an updated Depth Chart to come out after the second preseason game.