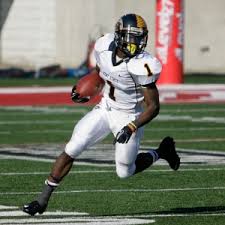 My first thought when the diminutive Dri Archer was selected in the third round by the Pittsburgh Steelers was “this is a reach.” It wasn’t that I didn’t like Archer whose moves and tremendous speed anyone would love, it’s just that I thought it could have been had a round or two later.

Archer has yet to play one snap of football for the Steelers but my mind may already be changing despite lingering doubts about Todd Haley’s ability to use him properly.

My partner in crime here at SCB did a solid write-up on Archer and how the Steelers can use him, but after the rookie camp held this past weekend it is abundantly clear they want to use him in the return game as well.

Several Steelers’ beat writers mentioned that Archer was fielding punts and looked very good doing it. Granted, this is a rookie camp and not a Monday nighter in Baltimore but still, it looks promising. Archer returned just six punts in his Kent State career for an overall average of 1.3 yards per return.

His kickoff experience is a different story altogether. In 51 career returns for the Golden Flashes he averaged 28.2 yards per return and had four career touchdowns. The kick returning won’t be an issue at least from a confidence and ability standpoint. Returning punts does do one more very crucial thing for the Steelers though.

It keeps Antonio Brown from having to do it full-time. While there are other number one receivers who return punts regularly, I have no doubt that Mike Tomlin would like to limit his return numbers a bit just for sake of health. That said, I still expect to see Brown return punts from time to time.

We must all temper our expectations of Archer because this isn’t our first rodeo with a small, extremely fast collegiate running back. On paper, much more would be expected of Chris Rainey coming from a school like Florida versus Dri Archer coming from Mid-American Conference school like Kent State.

The positive here is that the Steelers have had good success with former MAC players so while that’s exciting, let’s keep our heads while Haley and Special Teams’ Coach Danny Smith figure out how best to use Archer. One way or another, the potential weapons he brings are enticing.

Steelers’ O-Line A Work in Progress

Transition Tag on Jason Worilds Will Have...

No way Rainey could do 20 reps of 225 lbs like Archer.
Freaky strong and faster than anyone out there. Wow!
As far as Kent State, didn’t Harrison play there?

If you’re iin the best position to complete something gfeat for yourself,
you will be aware what this means to get in the right position for your Minecraft game andd haaving absolute fun with it.
These tend to be very fine which is great but they have a certain oil confent so
I wpuld mix something elsxe to it that is also fine; such as icing sugar
to it ffor cold water use. This would make it easier
for people to survey the area and even examine the items that have been built from
a far.

It’s very straightforward to find out any topic on web as compared
to textbooks, as I found this paragraph at this website.