Could Justin Fields Actually Fall to the Steelers at 24? 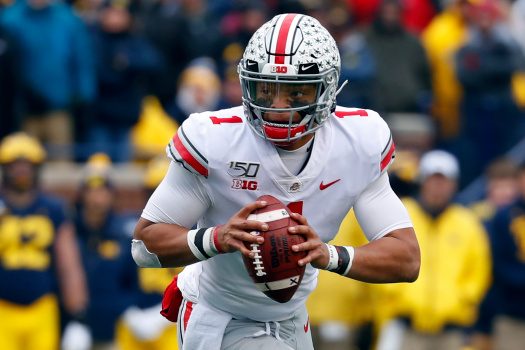 With so many people from so many different places putting out a bunch of mock drafts nowadays, you’re almost guaranteed to find a few head scratchers. It’s even more shocking when you see bold and unlikely predictions from big and well respected names throughout the NFL community. Charley Casserly, a former NFL general manager for Washington and Houston, and current NFL.com analyst, recently released his first mock draft for 2021. There were a few picks in his mock that were a bit questionable, but his most debatable prediction came at none other than the Pittsburgh Steelers picking at 24. Casserly predicted that star Ohio State QB Justin Fields would fall all the way to the back end of the first round, and land right in Pittsburgh’s lap. So given that a well respected football mind predicted this to happen, is it actually possible that the Steelers end up with Fields?

Justin Fields was seen as a lock for the number two overall pick in the draft right behind Clemson QB Trevor Lawrence not that long ago. However, with the emergence of other QBs such as Zach Wison, Trey Lance, and even Mac Jones, it’s tough to say exactly where Fields will land in this potentially stacked QB class. While a bit of a slide is certainly more than possible for Fields, it still seems like a bit of a stretch to say he falls that far. Casserly has QB needy teams like the New England Patriots and the Washington Football Team passing on Fields, and while it isn’t a guarantee that those teams will take a QB, it seems unlikely that they would pass on a guy like Justin Fields if he were sitting there at their pick.

While it certainly is very unlikely that Fields falls that far, it definitely would be wrong to say it’s impossible. Looking at the teams picking before the Steelers, the only team that you could really say absolutely has to take a QB, is Jacksonville. With them being a lock to land Trevor Lawrence, it leaves some of the other top QB’s with questions about where they’ll land. The Jets could take a QB at the number two pick, but they could also give Sam Darnold one more year. The Falcons at four have been rumored to take a QB, but they still have Matt Ryan playing well and under contract for multiple years. It seems likely that the Panthers will take a QB, but they do still have Teddy Bridgewater and a lot of defensive needs, so it’s certainly possible they pass on one as well. Washington has been heavily linked to signing Cam Newton, which could eliminate them from being interested in a QB, and we really never know what the Patriots and Belichick are going to end up doing. All these scenarios could definitely lead to one of the top QBs falling further than expected, and who’s to say the guy that falls can’t be Fields?

Chances are, at least one or two teams I listed above will end up taking a QB in the 2021 draft, but there is definitely a chance that some of them pass on the idea of taking a signal caller. Teams like the Jets and Falcons already have respected QBs on their roster, and nobody really knows exactly what they are going to do with their pick. All of the top QBs could end up being picked in the top 10, or we could possibly see one or maybe even two of them be available in the middle of the first round. While it is definitely unlikely that the Steelers will watch Justin Fields fall into their lap, it wouldn’t be accurate to say that it 100% won’t happen. Aaron Rodgers is a perfect example of a top QB falling in the draft, when he fell all the way down to the Packers coincidentally, 24th overall, the same pick that the Steelers have this year. If Fields is there at 24, it’s hard to imagine Pittsburgh not grabbing him. We know that they still have faith in Rudolph, but Fields sitting behind Roethlisberger for a year before taking over the starting job would be a perfect situation for him. Fields’ potential on top of learning behind a legend like Ben would give him an amazing opportunity to be a superstar in the NFL, and would allow Pittsburgh to remain competitive for years down the road. Don’t expect the Steelers to walk away with Justin Fields when the 2021 draft is all said and done, but crazier things have happened.

SCB Steelers Podcast 211 – A New Deal and RB vs OL