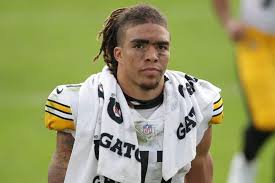 I’m totally stealing the title of this article from a friend. As much as I dislike social media, there are times when I’m actually enlightened, educated and amused. When Pittsburgh Steelers’ wide receiver Chase Claypool called himself “a top three wide receiver,” it sent Steelers Nation into quite a firestorm. As I was contemplating my own thoughts on Claypool’s comment, I saw Jasmine’s tweet.

Poor Chase. This fanbase has been bursting at the seams to go crazy about something & he served it up on a platter 🌚

She’s absolutely correct. As I’ve mentioned as recently as last week, this period of time between mini-camp and training camp is always a dangerous area for players. Regardless of what Claypool’s intentions were by claiming to be one of the best three wideouts in the game, the foundation was laid for our period of quiet to end.

On one hand, we should praise Claypool for having the confidence to say such a thing. That’s exactly what we want after all isn’t it? Better to be confident in one’s self than not. This is the sport that’s produced Deion Sanders and Joe Namath who were famously confident to a fault.

Then there’s the other hand where comments like these aren’t always welcome. Had Claypool made these comments following his rookie season then we might be having a different discussion. The fact is, he made them after a season in which he wasn’t even the third best target on the offense. Diontae Johnson, Pat Freiermuth, Najee Harris and even Ray Ray McCloud had Ben Roethlisberger’s attention more than Claypool did.

The dropped passes and inability to stay on his feet were enough to drive many Steelers’ to the brink of madness. Then there was the immaturity he displayed in Minnesota which was probably the clincher for many fans in black and gold.

Claypool’s comments are actually a good lesson for all of us in a couple of ways. First, we can all agree that he probably shouldn’t have said them. It’s kind of like when a politician says what they probably shouldn’t. Our response is based on our overall likeness of that person. The same is true here with Claypool. Secondly, the comments remind us that what we put out there can be interpreted numerous ways. As Jasmine said in her tweet, it wasn’t so much what he said as much as it was that he served it up on a platter.

And for this fan base, that platter is huge and is always ready for a main course. Claypool was only too willing to oblige.