Another Year Without the Playoffs Further Divides Steeler Nation 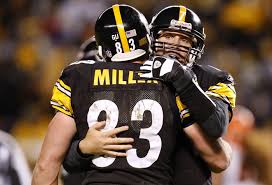 Many of you younger fans will probably not remember this movie but back in the 1990’s an action-comedy was made starring veteran actors Jack Lemmon and James Garner.

It was called “My Fellow Americans” and in it, they both played former presidents who were out to expose the current one. During one of their discussions, Jack Lemmon’s character said something that rings absolutely true for all of us in the Steeler Nation.

He talked about how being president was a no-win situation because no matter what you did, there were always going to be unhappy people, In other words, millions of voices screaming out for something different but only a handful being happy with the result.

In other words, only a handful will be happy with whatever the Steelers’ ‘powers that be’ decide once this season comes to an end following Cleveland’s visit to Heinz Field on December 29th. To go with that small handful, there will be a dump truck full of people who will piss and moan over what the Steelers did or didn’t do.

This is not abnormal. Nearly two years later the pro-Bruce Arians crowd and the anti-Bruce Arians crowd still butts heads. There are those that want Dick LeBeau gone sooner rather than later and those who believe he should coach until he’s 92. Or longer…

There is the anti-Mike Tomlin faction who hates him because his time management sucks, his preparedness sucks or just because he happens to be black. Opposite that is the pro-Mike Tomlin group who recognizes his two Super Bowl appearances and one title and commitment to the Steelers’ traditions.

Shall I go on? OK, there’s the DeCastro haters and lovers, the Troy Polamalu bashers and fans and don’t forget those that love and hate the Steelers’ ‘bumblebee throwbacks.’

About the only consensus the Steeler Nation can come to is that Heath Miller can pretty much do no wrong but even that is starting to wane a bit in some circles.

Isn’t it ironic that the Rooney Family supported President Obama? They both have something in common don’t they? Not everyone is happy with the decisions they make yet the sun continues to come up. Well, at least there’s one group that thinks so.

NFL Network at it Again With Big Ben?

Clarence, every time I think you’ve disappeared you show up again!! Good to see you back.

Can we move on from Dick LeBeau After this season. Please! It’s time to get a young attacking Defense.

The Steelers just seem snakebitten this year. It seems like whatever can go wrong does go wrong. This is a good team and a decent coaching staff. While I disagree with letting Arians go and hiring Haley, they should be winning. I would love to coach this team. Being lifelong fans I think some of us understand Steeler football better than some of the coaches that go from team to team.
Yesterday when the Steelers had the ball with the lead, the offensive plan should have gone back to old school physical run the ball and at least get a field goal, run some clock and rest the defense. Haley called passing plays and gave the ball right back to Miami. The formula of getting the lead and running the ball that Cowher and Bettis mastered is gone. Even during the Bradshaw days how many times did they win ugly? (Like 10 – 6) A-LOT!
I don’t understand the play calling and I am surprised that the defense is giving up so many big plays. The Steelers seem to have an identity/philosophy issue. I am at a loss for words.

There can be no debate! Bumblebee throwbacks are an abomination before everything holy. The football gods are so horrified by them that they have banished the Steelers from the playoff until they are removed from the equipment room and burned.