NFL Network at it Again With Big Ben? 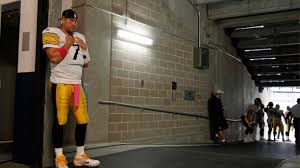 After the Pittsburgh Steelers’ loss to the warm-weather Miami Dolphins on a cold and snowy day in Pittsburgh, Ben Roethlisberger sat at his locker and answered questions as he always does.

Like any NFL city, Pittsburgh has really knowledgeable and smart football journalists and it also has those who are rather clueless in my opinion.

The NFL Network usually relies on these local guys in order to get soundbites and so on for their own use. Why? Because the majority of reporters at NFLN are nothing more than spreaders of gossip. This is what they do.

That said, Roethlisberger and most other players dutifully answer questions no matter how good or bad. Yesterday, Roethlisberger was asked about fewer second half runs and replied with the following…

“No idea. Coach Haley’s over there, you can probably ask him. Whether it’s scheme, I don’t know… There was no particular reason. We just tried to move the ball and I thought we did a good job passing it there, too.”

What’s interesting about this is that the NFL Network only played the first part of that comment which dealt with Haley. Taken just as that, it sounds like another shot at Haley and maybe it is, but in its’ entirety the quote is much more harmless.

I mention this because this is exactly how rumors get started and how they are allowed to flourish. The NFL Network is continuing to prove itself as nothing more than a grocery store checkout gossip rag.

I’m not suggesting that Haley and Ben have this ‘type of relationship’ or ‘that type’ because I really don’t know but what I do know is that this is how this crap gets started.

With Ian Rapoport’s story about Ben wanting to leave already out there with little to support it, his employer continues to do their best to create turmoil in Pittsburgh.

Doesn’t the NFL Network realize the Steelers are good at doing that themselves?

Another Year Without the Playoffs Further Divides Steeler Nation