A Big Year From Sanders Not Out of the Question 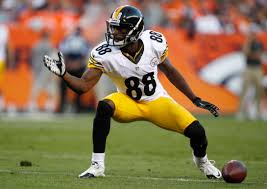 Back in the spring I was 100% on board the train that said “let Emmanuel Sanders go to New England.” The Patriots had signed him to an offer sheet but as a restricted free agent, the Steelers had the right to match and so they did. The pay-off of letting Sanders walk would have been a third round pick in this past draft and I was all for it seeing as how this team needed to get younger.

With those things said, I understand why Ben Roethlisberger lobbied for him to stay in Pittsburgh. I get that completely because with Mike Wallace gone and Heath Miller on the mend, only Antonio Brown remained from the corps receiving group.

Flash-forward to last Saturday night as the Steelers hosted the Giants in the preseason opener for both teams. Something became very apparent to me in a way that was much more demonstrative than I imagined it would be when I knew Sanders was returning. There is a very good chance that Emmanuel Sanders could end up being the leading receiver for this team.

While Sanders and Brown were each targeted three times by Ben Roethlisberger, Sanders caught all three. Brown made a spectacular sideline catch in the end zone but couldn’t keep his feet in bounds and finished with zero receptions. My point is that Sanders will be the beneficiary of Brown being covered by the defense’s number one corner. Much in the same way Brown benefited from Wallace on the side, Sanders will now benefit as well.

Brown is not Wallace in terms of speed, but he is a significantly better route runner and is quicker and more elusive. He might not see the double coverage Wallace saw at times, but he will force corners stay alert.

That’s where Sanders comes in. He has already proven he’s a guy willing to go over the middle and catch the ball in traffic. Now he can make a living doing that especially when Miller returns and if the third receiver sparkles as well.

So what’s the bad news? Well, that all depends. If Sanders has a big year like I think he will having seen the offense admittedly just once, that means he will want big money. Remember, he is a free agent at the end of the year…. I can’t see the Steelers paying too much for his services when they already have Brown locked up at a significant price.

If the Steelers truly believe Sanders is worth keeping then they best take care of things now. The other caveat here is the play of Markus Wheaton and potentially that of Justin Brown who was the leading receiver Saturday night. If the Steelers feel those guys can fill any void left by Sanders then there is no need to negotiate.

It is still incredibly early in this process but if my wheels are spinning I can only imagine the wheels of Kevin Colbert and Mike Tomlin are as well. I could be totally wrong here and Sanders could have a fairly pedestrian season but I think he goes well above the 44 catches he had last year.

Dwyer No Sure Thing to Make Steelers’ Roster

Contracts, No-Shows and…. Just Another Year at...

With J Brown ..Wheaton and even JD Woods I don’t see the Steelers being pressed to negotiate right away ..And if the do I don’t think it would be worth AB money. I was one who wanted that extra 3rd round pick but like u said I understand why they kept him. Actually I think he CAN be better then AB if he stays health:y and holds on to the ball.