Dwyer No Sure Thing to Make Steelers’ Roster 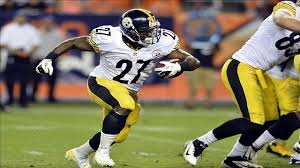 It’s hard to believe that just one year after he led the Pittsburgh Steelers in rushing that Jonathan Dwyer could be the odd man out in the race for a roster spot at running back. I had a nice conversation with Steel Blitz Blog last night via Twitter and we both came to the same conclusion. The math just isn’t adding up for Dwyer to make the 53-man roster.

Le’Veon Bell is clearly the number one back despite being a rookie. I even surmised that the Steelers could be giving him the veteran treatment already by limiting his preseason game action. Could be completely wrong there but it sure looks that way on the surface.

Free agent signee LaRod Stephens-Howling made it quite obvious against the New York Giants that he’ll be making this team. He proved that not only will he be a potential third-down back but can perhaps carry the load for short periods of time as well.

Both Redman and Dwyer have very similar contract situations right now. They are scheduled to make about $1.3 million this year and are both in the final year of their respective deals.

Batch makes much less and has a role that extends beyond just running back. Batch is also a valuable special teams player and that fact alone may keep him around ahead of Dwyer despite him not being nearly the runners they are.

While I credit both Redman and Dwyer for coming into training camp in shape and ready to compete, I believe Redman offers the Steelers just a little bit more than Dwyer does. He blocks better, pass protects better and catches the ball better out of the backfield.

I have more faith that Redman can be a full-time back should something happen to Bell than I do Dwyer. If that sounds like a knock on Dwyer it is. How often did we see him last season needing a blow after two straight carries?

I know a lot of people will clamor for Batch to be the one to get cut and I get that. Batch doesn’t do much in terms of exciting anyone offensively but he does serve a purpose cheaper and more effectively than Dwyer.

Injuries can still happen and things could change drastically over the next couple of weeks but right now I see Dwyer looking elsewhere for work.

A Big Year From Sanders Not Out of the Question

LeGarrette Blount’s Helmet All the Rage on...

I think Batch is the odd man out, not Dwyer. Time will tell.

In a perfect world I agree Mark. I really have no use for Batch. I just don’t think the team will want to keep both Red and JD with the current contracts and little use on ST. Thanks for reading!

Any chance they try to trade him? I’ve been waiting or Dwyer to bust out, but I agree with you. Any Vance he gets some points for signing his tender immediately while Redman took his time?

Good questions Matt. It’s possible that Dwyer could be traded to a team that has a running back go down in the preseason which is why the Steelers will hold onto him for the time being. With just this year on his contract, he could be enticing to a team that needs to ‘rent a back’ so to speak. I don’t think his good-hearted negotiation will make much difference. Redman just does more things overall better at least right now.

[…] For those of you who thought the Steelers would get through camp with few injuries you can forget that now. The NFL really is a league where the team with the best overall depth finds the most success. In this case, the injuries to Redman and especially Bell have left the door wide open now for Jonathan Dwyer to make the roster. I wrote earlier in the week that his luck may have run out but apparently not. […]