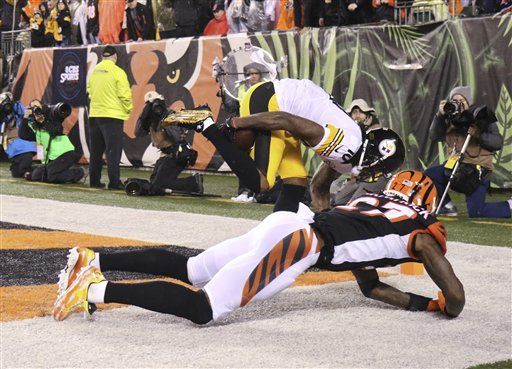 The Steelers return to practice today from 115-315pm ET after enjoying a day off.

Head Coach Mike Tomlin offered a few nuggets during his weekly press conference yesterday. On the injury front, he refuted a report from ESPN’s Bob Holtzman that said “It wasn’t looking good” for Antonio Brown to play Sunday. Tomlin would only say Brown continues to be in concussion protocol… Tomlin was not as specific as Ben Roethlisberger was about his injury but wouldn’t give away much regarding his status for Sunday… Tomlin also refuted reports that he gave a game ball to Outside Linebackers’ Coach Joey Porter following the win over the Bengals.

SCB writer Chris laid out his advice to Steelers’ Defensive Coordinator Keith Butler for attacking Peyton Manning this weekend. Make sure you check it out.

Tweet of the Day… I couldn’t resist using this today. Free advertising for AB but I’m sure the check is in the mail!

Bud Dupree, Jarvis Jones and Ryan Shazier all had big days in the win over Cincinnati but they’ll need to keep that up heading into Denver. Pressure on Manning and hands in face will be crucial to slowing him down.

The Broncos seem very focused on Cody Wallace who they say took a cheap shot on one of their players when the teams met in Pittsburgh in week 15. I’m fine with that. If that’s where their energy is focused then so be it. Means they aren’t concentrating on things they probably should be.

Can’t say enough about Chris Boswell. Can only imagine where this team could have finished had he been signed right after Shaun Suisham was lost for the season. May have been as much as a two-game swing in the standings.