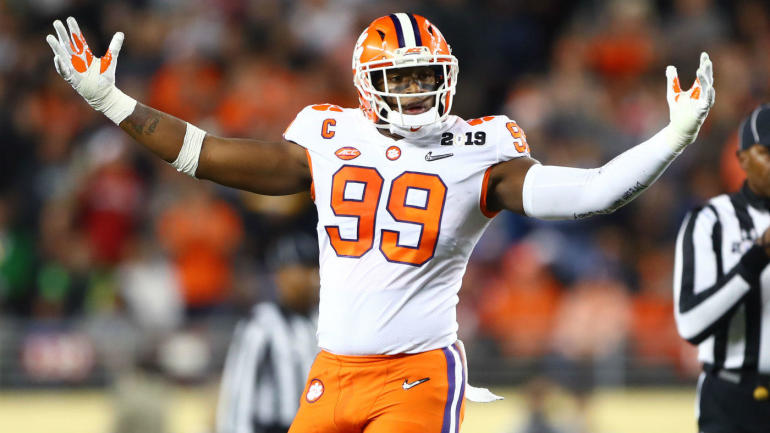 Both Devin White and Devin Bush have risen to be this offseason’s worst kept secret, and it’s for that exact reason that the Pittsburgh Steelers should enter the 2019 NFL Draft with a backup plan. With that in mind, they should steer clear of “reaching” for a linebacker at #20, and perhaps look in the direction of Clemson Tiger Clelin Ferrell.

One thing that leaps off the screen with Ferrell is how decorated an athlete he is. He boasts a proven track record in his 3 full seasons at Clemson, as he was prolific in collecting awards and nominations. Furthermore, he consistently contributed large numbers of plays over the season, including leading the league in TFL. On top of that, he boasts a pro-ready frame set for the NFL, which will attract suitors immensely.

He showed solid play awareness, as he sensed when to stop pursuing the passer and get his hands up to deflect the ball numerous times. Ferrell’s arsenal of techniques is fairly diverse and are polished to a good standard. Has participated in several snaps in coverage, which produced positive results. Moreover, he can also play the run too and boasts exquisite play diagnoses. His speed has yet to limit him on film, despite having not completed the 40-yard dash. His tackling ability is very good, wraps up the ballcarrier tightly and executes the play. Ferrell’s most impressive attribute is that motor of his. He doesn’t quit on any play – constant, relentless effort all game long.

On the left side of the line of this HOLD by the RT, Clelin Ferrell made Jonah Williams look silly! Clelin also blew up Jonah on this other play! pic.twitter.com/kU52WLKF2B

He often got swallowed up at the LOS by double-teams. He absolutely MUST improve the path he takes to the QB, as he often tries to do too much and in turn does too little. In addition to that, he doesn’t possess that elite level shiftiness, which is somewhat reflected in his 3-cone drill performance, as well as film. A large question remains in regard to the idea of whether or not his production is partly a result of playing alongside such a talented D-Line? Another concern is his production variation from one game to another. (For example, just 2 tackles vs. South Carolina, or 3 vs. Syracuse, yet he dominated against Notre Dame with 4 tackles, 1 sack, 1 FF and 1 FR.)

The former Clemson Tiger has done it all at the collegiate level, whilst being a three-year perennial starter for his team. Whilst his ability and potential upside are hindered by his shiftiness and hip movement, he remains one of the more polished athletes entering the 2019 NFL Draft. Moreover, his football IQ and explosive reactionary awareness sets him above the majority of his positional counterparts, and for that reason I believe that he boasts second round talent.

That said, I do believe he will be selected in the latter stages of the first round for sure, just not by the Steelers. The reasoning behind this viewpoint is because I believe the Steelers have far too many holes that need plastered over imminently, and whilst I think Ferrell’s talent would be a fantastic addition to the defense, I cannot foresee Kevin Colbert overlooking our impending needs at either linebacker, cornerback or wide receiver with our first round selection.