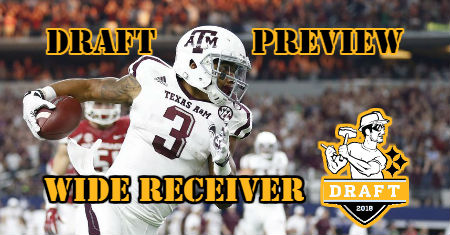 With two weeks remaining until the NFL Draft, we’ll be taking a position-by-position look at the Steelers roster and where the team has the biggest needs. Despite winning the AFC North Crown and finishing an over-ruled catch (that is now a catch) away from being the #1 seed in the AFC, the Steelers have plenty of needs to address on their current roster. While some believe the Steelers need to focus exclusively on defense in the upcoming Draft, the team has generally split their draft picks between offense and defense. The Steelers will have 7 picks in the draft with no picks in the 4th or 6th round but with 2 picks in the 5th and 7th rounds. Today’s preview will cover the wide receiver position.

Check out the previous positional previews:
Quarterback
Running Back

Also check out our Prospect Profiles and Episode 67 of the Steel City Blitz Podcast where we talk about QBs, TEs, and DL.

At first glance, the Steelers depth chart at wide receiver seems mostly set. Antonio Brown is the clear #1 and after JuJu Smith-Schuster’s phenomenal rookie year he appears primed for even more action in 2018. Martavis Bryant continues to work his way back into full form since his 1-year suspension but is also entering the last year of his contract. Darrius Heyward-Bey has established  his value as one of the best special teams players on the team and is a serviceable 5th receiver. Justin Hunter was re-signed to a 1-year deal and both Marcus Tucker and Justin Thomas spent last year on the practice squad. The only real “loss” was slot receiver Eli Rogers who suffered a torn ACL against Jacksonville. He is rehabbing the injury but remains unsigned.

If the Steelers do not select a wide receiver in 2018, their depth chart will be fine. They have 5 capable players in Brown, Smith-Schuster, Bryant, Heyward-Bey, and Hunter. That said, Bryant, Heyward-Bey, and Hunter are all entering the last year of their contracts. This means that the only receivers under contract for 2019 are Antonio Brown and JuJu Smith-Schuster. The Steelers have time to address this depth issue and do not need to add a receiver in this draft, but it might be prudent to start looking towards the future and adding depth to the position this year – particularly a player with some experience as a kick and punt returner so that AB and JuJu do not have to handle those duties this year.

Potential Prospects: This draft class does not have an elite wide receiver prospect. Most outlets consider Alabama’s Calvin Ridley and Maryland’s DJ Moore as the top players in the class, yet it is uncertain if either will go in the first round. Obviously, it is better for the Steelers if teams in the top 27 picks take wide receivers, but this could wind up like the 2008 draft where no wide receivers were taken in the first round.

The Steelers have shown interest in smaller, slot-type wide receivers so far in the pre-draft process. They had visits from Texas A&M’s Christian Kirk, LSU’s Russell Gage (READ: Steel City Blitz Prospect Profile), Middle Tennessee State’s Richie James (READ: Prospect Visit Summary), and Penn’s Justin Watson. The Steelers also reportedly had dinner with Oklahoma State’s James Washington after his Pro Day. Kirk and Washington are considered the highest-rated of these prospects, but both are likely to be second round players.

Pitt fans will remember James Washington as the guy who put up 9 catches for 296 yards and 2 TDs on their defense last year after recording 5 catches for 124 yards the year before. Western PA football fans should remember the name Justin Watson – he was the leading receiver on South Fayette’s 2013 WPIAL and PIAA Championship team. Watson held the WPIAL single-season receiving yardage record before Mt. Lebanon’s Aidan Cain broke it this season (and was then surpassed by Gateway’s Courtney Jackson in the playoffs). Watson continued his record-breaking career at Penn, breaking school records for receptions, receiving yards, and touchdowns. Watson, along with James and Gage profile as Day 3 or UDFA players.

[…] safety, running back, and cornerback. They have spent some time on depth defensive linemen and wide receivers. They have also scouted the second tier of quarterbacks. The Steelers have spent very little time […]