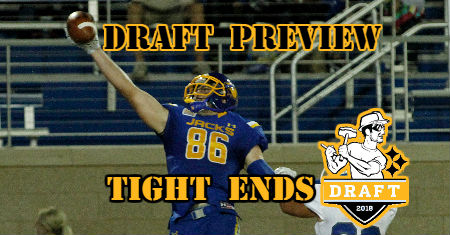 With fewer than two weeks remaining until the NFL Draft, we’ll be taking a position-by-position look at the Steelers roster and where the team has the biggest needs. Despite winning the AFC North Crown and finishing an over-ruled catch (that is now a catch) away from being the #1 seed in the AFC, the Steelers have plenty of needs to address on their current roster. While some believe the Steelers need to focus exclusively on defense in the upcoming Draft, the team has generally split their draft picks between offense and defense. The Steelers will have 7 picks in the draft with no picks in the 4th or 6th round but with 2 picks in the 5th and 7th rounds. Today’s preview will cover the tight end position, which was also covered on Episode 67  of the Steel City Blitz podcast (along with QBs and DL).

The Steelers enter the 2018 Draft with the same tight end depth chart that started the 2017 season. Vance McDonald was acquired for a 4th round pick and returned the 49ers 5th round pick. All told, McDonald’s acquisition cost the Steelers 20 spots on the board, moving down from pick #128 in the 4th round to pick #148 in the 5th. The two factors here were San Francisco’s late season run with Jimmy Garoppolo bumping their pick deeper into the 5th round and the NFL awarding 5 compensatory picks at the end of the 4th round. The Steelers have McDonald under contract for 4 more years, but since they acquired him via trade, are able to cut him at any time with minimal salary cap implications. The Steelers could upgrade their #1 tight end spot with a top-end player (given McDonald’s injury history) or could look for a late round blocking TE to upgrade the #3 spot over Xavier Grimble.

With McDonald under contract and Jesse James still playing on his rookie deal as a serviceable #2, it would seem that the Steelers only real need for an upgrade is at the #3 tight end spot over Grimble. If the Steelers want to move on from McDonald, a tight end in the first or second round is entirely possible, but with more pressing needs elsewhere on the roster I think they will stick with McDonald’s upside for at least 1 more season.

Potential Prospects: Overall, this is a relatively weak tight end class. There are 3 or 4 players at the top of the class that are worth getting excited about, but not a lot of depth behind them. South Dakota State’s Dallas Goedert is the only player getting first round buzz at this point, but even that is not guaranteed. The Steelers sent tight ends coach James Daniel to his Pro Day and reportedly have Goedert on the schedule for a future pre-draft visit. Despite playing against a lower level of competition on the FCS level, Goedert was incredibly productive and has the combination of size, athleticism, and blocking ability to be an all-around tight end in the NFL.

The second tier of tight ends includes Penn State’s Mike Gesicki, Oklahoma’s Mark Andrews (READ: SCB Prospect Profile), and South Carolina’s Hayden Hurst. Gesicki is an absolute athletic freak who posted off-the-charts numbers (over the 90th percentile for TEs) in wingspan, the 60-yard shuttle, the 20-yard shuttle, the 3-cone drill, the broad jump, the vertical jump, and the 40-yard dash. He fits the mold of the “joker”/move TE role and probably won’t bring much in the blocking department but can get down the field and make big plays on deep balls. Opinions have cooled on Mark Andrews as the draft process has gone on and he seems to be projected as a Day 2 player while Gesicki’s performance at the combine lifted his stock into being potentially a late 1st rounder or early to mid-2nd rounder.