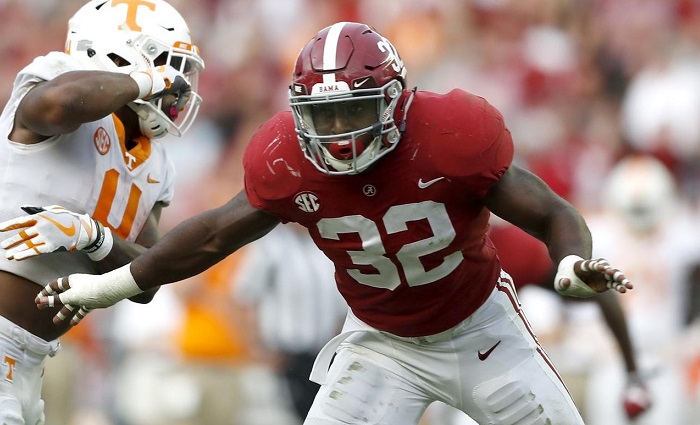 After Ryan Shazier’s horrific injury, which has his future as a football player in jeopardy, inside linebacker becomes a very high priority. As a result of the injury the play from the ‘Mack’ linebacker spot in 2017 was underwhelming, which led to the Jacksonville Jaguars exposing this Steelers’ defensive weakness. The Steelers need to replace Shazier and rejuvenate the linebacker position with a stud. Today, we study Alabama’s Rashaan Evans.

Background: One of the top outside linebackers in the class of 2014 and a five-star prospect out of Auburn High School. No. 1 outside linebacker and No. 2 player in Alabama. Chose Alabama over Auburn and UCLA. Selected as one of the Tide’s permanent team captains as a senior. First Team All-American by the AFCA.  First Team All-SEC from the Associated Press. All-SEC second team by the conference coaches.

What’s to like: Has prototypical size interlaced with extremely physical and aggressive. Sheds and avoids blocks very well while maintaining good position on the ball carrier. An effective blitzer, whether that may be from the edge or the interior gaps. Is an inside linebacker that can give quality snaps rushing the passer from the outside if needed. Hard hitter who takes pride in his old fashion method of play. Quick to diagnose plays and reacts accordingly. Works sideline to sideline well. Covers a lot of ground in zone coverage. Relentless effort and motor. Decent in man coverage. Good form tackles. Although didn’t test well in some areas, Evans’ film displays a good amount of athleticism.

Concerns: There are concerns about Evans’ health, long term durability and ability to trust his word after not running the 40 at the NFL Combine. He told scouts he would run at his Pro Day, didn’t, said he would run at the 2nd Pro Day, then didn’t again. Has dealt with a groin injury, missing two games in 2017. Lacks instincts due to lack of experience at the position. Fast and aggressive play leads to cutbacks and over pursuit. Can miss tackles due to lunging at the legs of ball carriers, won’t work in the NFL. Some of his NFL Combine testing numbers are very worrisome (30” vertical jump, 116” broad jump).

Verdict: It’s difficult to get a beat on Evans since his film and body of work on the field is very good but some durability and trust concerns may drop him even into the second round. He could very well be in play for Pittsburgh at 28 if he is available, but history suggests otherwise. The Steelers haven’t taken an Alabama player since 1999, and they like their early round draft picks to put up attractive athletic numbers. The possibility of Evans being selected at 28 should be celebrated, as he is a stud on the field.