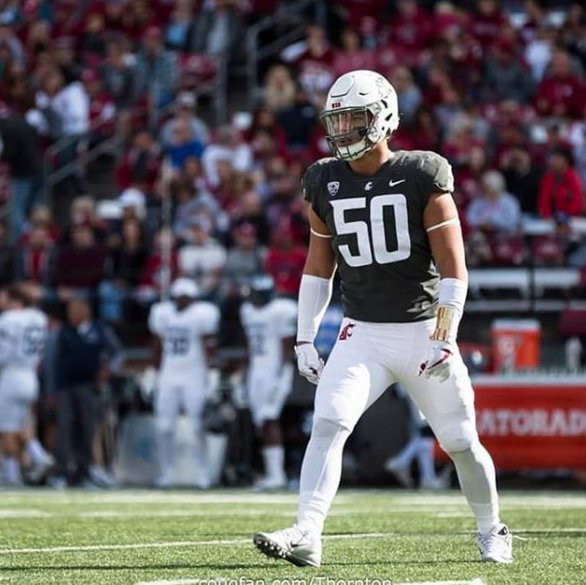 The Pittsburgh Steelers don’t have many current needs, but one they may want to shore up in the future is outside linebacker. Bud Dupree may not be in Pittsburgh for the long haul after having another disappointing season after many were expecting a double digit sack-breakout season. The back half of the 2017 season, it really seemed like Dupree was giving much less than 100% effort. A guy who can come in and be a relentless force is Hercules Mata’afa.

What’s to like: Lets start off with the obvious, what a great name. Has prototypical outside linebacker size. Highly productive. Sets a hard edge with good technique. Keeps his outside arm free, forces runs inside to his help. Although he played inside the defensive line, he displayed an insane amount of physical toughness and resiliency for a guy his size. Possesses a high caliber motor, plays at 110% every play until the whistle. If he doesn’t win off the get-go, he stays at it; this wears down offensive lineman. A quick first step that is tough to combat. Can bend off the edge and takes good angles at the quarterback. Doesn’t get ran up the arc and taken out of the play. Has a lethal swim move. Will draw holding penalties by his ferocious style of play.

Concerns: Played out of position at Washington State; he was used as a 3-tech but still has edge rushing experience. Will need time to transition to outside linebacker in the NFL.  Won’t wow you with athleticism. Doesn’t have the film to display an arsenal of pass rush moves. Minimal experience in coverage. Will have to learn leverage and responsibilities as an edge rusher. Has minor balance issues, seems to lose his balance often.

Verdict:  Mata’afa is a pure projection pick. He has a ton of tools and athleticism but he will have to learn a new position going into the NFL and that may scare some teams off. The Steelers should be interested in Mata’afa because he is talented, has high potential, knows how to get to the quarterback and his work ethic is off the charts. They are also in a situation where they can sit Mata’afa behind Bud Dupree until after the 2018 season. I, for one, don’t think Dupree’s 5th year option will be exercised. The Washington State product can use a year to sit, learn and harvest knowledge on his new position (outside linebacker) while being an absolute monster on special teams. While my grade may change due to his combine, I think he’ll be a Day 2 guy when its all said and done. I’ve done some reading and I am higher on him than most, which I am okay with.

I can here it now after a sack. ” He’s a baaaaaad Mata’ afa”