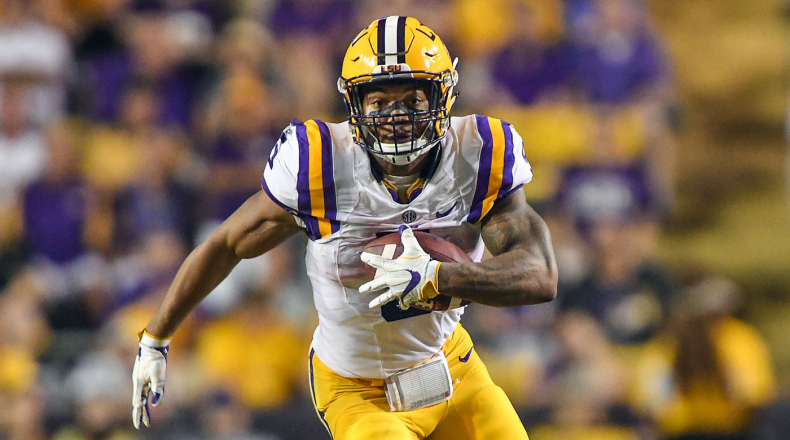 In the event that the Pittsburgh Steelers do not retain the services of Le’Veon Bell, a replacement must be had. While I like James Conner, I do not see him having the same type of impact and he’s coming off of an injury. Therefore, running back will be high on my list and I’m starting with Derrius Guice.

The Skinny: Guice arguably had a better Sophomore campaign than he did in his more recent Junior one and that shows on tape. Keep in mind that Guice had that big Sophomore season with Leonard Fournette nursing injuries.

What’s To Like: This kid rarely gets thrown for a loss. Even on his toughest runs he finds a way to fall forward or lunge forward and get positive yards. His pad level is pretty good which helps him reduce big hits from defenders. He has an uncanny ability to bounce off tacklers and get forward. He reads his blockers well and gets himself in good position for solid gains and I think this is due to really good vision. Not the fastest guy, but he has big play ability.

What’s Concerning: One of the few major concerns I have with Guice is pass blocking. He does not look to attack the pass rusher and instead waits for him. When he does get aggressive he typically tries to throw a shoulder or go low rather than take the man on head-up. In some cases, he flat-out misses the pass rusher altogether. I think he has the ability to be a good pass catcher but that wasn’t always on display and it’s hard to say convincingly right now. I like his overall agility but some of the lateral movement behind the line concerns me. That won’t fly at the pro level.

The Verdict: Le’Veon Bell has proven just how valuable three-down running backs are in the NFL. From Kareem Hunt to Alvin Kamara, it’s a trend that isn’t going away anytime soon. I’m just not convinced that Guice can be a three-down guy in the same mold but I’m not ruling it out. His pass protection as I detailed is a major concern but I’m not so sure how good of a receiver he can be either. What can’t be denied is that he runs as hard as anyone in this draft. He will get you yards in any situation between the tackles. Will he have enough speed for the edges at the NFL level? That’s a major question mark. I think he’s destined for a day two/2nd round selection and unless Bell does leave via free agency I don’t see him becoming a Steeler.

[…] While I don’t agree with some of SteelDad’s assessments of Guice, here is his Draft Prospect Profile. […]