This is your ultimate gameday guide to the Pittsburgh Steelers and the Kansas City Chiefs. Our Three-Point Stance is sponsored by ‘Nail the Number’ which has returned with a huge new contest!! Check it out at steelcityblitz.com.

What You Need to Know: The Steelers last lost to Detroit in 1998 on Thanksgiving in the infamous “coin flip” game… The Lions are scoring 26.8 points per game but they are surrendering 24.8 points per game on Defense… Sean Davis’ forced fumble last week was the first of his career… Pittsburgh is now 4-0 on the season when they score 20 or more points… The Black and Gold are 3-1 on the road in 2017… Last week was Big Ben’s 77th game in which he had a passer rating above 100… Following this game, the Steelers only NFC North opponent remaining will be Green Bay.

What’s at Stake: The Lions come off the bye with the NFC North being headed by Minnesota at 5-2. They need a win to keep pace in a division that no longer has Aaron Rodgers healthy… The Steelers need a win to head into their bye on a positive note and to keep pace with Kansas City and New England for the top seed in the AFC.

Stick With What Works. No one can over-think things quite like Steelers’ Offensive Coordinator Todd Haley. For recent evidence may I present throwing the ball 55 times against the NFL’s best pass defense… Right now Le’Veon Bell is in his own form of ‘Beast Mode.’ He’s running the ball and he’s catching the ball and he’s making things happen. There is no reason to stray from that formula. He has to make the Lions prove they can stop the run and they’ve done a good job of it so far ranking 6th in the league. Still, do what you’ve done well until the other team stops you. This is not a difficult game to play unless one makes it that way.

Attack, Tackle,and Attack Some More. The Steelers’ defense was incredibly impressive in the second half last week against the Bengals and part of the reason was pressure and good tackling. That will be needed again this week because the Lions possess two guys who don’t go down easily. Golden Tate (who is expected to play) is one of the league’s best receivers at breaking tackles and running back Ameer Abdullah is also a very tough guy to bring down. Keith Butler’s unit must wrap these guys up. On the pressure side of things, the Steelers can expect to see some weaknesses along the Lions’ front so I fully expect Cam Heyward and company to pick up where they left off last week.

Someone Has to Step Up on O. Martavis Bryant is on the bench. Vance McDonald is out with a knee injury and JuJu Smith-Schuster spent some of this week in concussion protocol. Ben Roethlisberger will have Antonio Brown and Le’Veon Bell of course but someone else has to be that third option. It could still be Smith-Schuster… Jesse James? Xavier Grimble? Maybe Justin Hunter? While the Steelers could survive, that one extra option could be a major part of the Steelers’ success. 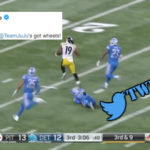