The WPIAL season got into full swing with Week 1 games last weekend. With the scheduling changes made by the WPIAL in 2020, all of the conference games are back-loaded in the schedule. This means the for the first two weeks of the regular season, all games are against non-conference opponents. The WPIAL scheduled a number of historical rivalry matchups in Week 1 to add some extra excitement. The biggest story of the week was Seneca Valley beating Pine-Richland on a touchdown pass with 9 seconds left. This week on the WPIAL Blitz Show, we interviewed Seneca Valley offensive coordinator Ryan Lehmeier, who was also the former offensive coordinator at Pine-Richland. You can follow coach Lehmeier on Twitter @R_Lehmeier.

Here’s a look at the game-winning touchdown pass that gave Seneca Valley their first win of the season.

After the game, Seneca Valley QB Graham Hancox and WR Brandon Ross talked about the play.

Seneca Valley’s @GrahamHancox and @BrandonRoss22 talk about their 24-20 win over Pine-Richland. Hancox threw a 24-yard touchdown pass to Ross with 0:09 left in the game that sealed the victory for Raider Nation. @Seneca_Valley @SV_Sports @SvStudntSection pic.twitter.com/8Awxd1Dbkf

Congratulations to our Brute Athletic Player of the Week Devin Whitlock. In a rematch of last year’s 4A quarterfinals, Belle Vernon topped Chartiers Valley 49-14. As a passer, Whitlock was 9-for-11, for 135 yards and 1 touchdown. But he did most of his damage on the ground where Chartiers Valley just could not stop him. Whitlock ran just 6 times and totaled 133 yards and scored on 4 of those 6 attempts. Check out his highlights from Friday night’s game:

Other top performers this week included Penn-Trafford’s Cade Yacamelli who had over 200 yards of total offense and 4 total TDs, Central Valley’s Landon Alexander who had over 400 all-purpose yards and scored 4 times, and Mt. Lebanon’s Alex Tecza who ran for over 200 yards and 3 TDs in the rivalry victory over Upper St. Clair.

You may have heard of Waynesburg Rain Day. It has rained in 116 of the last 148 years in Waynesburg on July 29. Well, on Friday night Waynesburg ended their 15-game losing streak in style, by raining touchdowns down on Bentworth. The Raiders scored a 64-20 victory over the Bearcats, led by Breydon Woods’ 275 yards and 4 TDs. While Woods was the statistical star, it was a team victory for Waynesburg who scored touchdowns on offense, defense, and special teams. 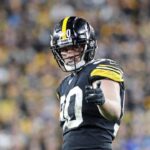