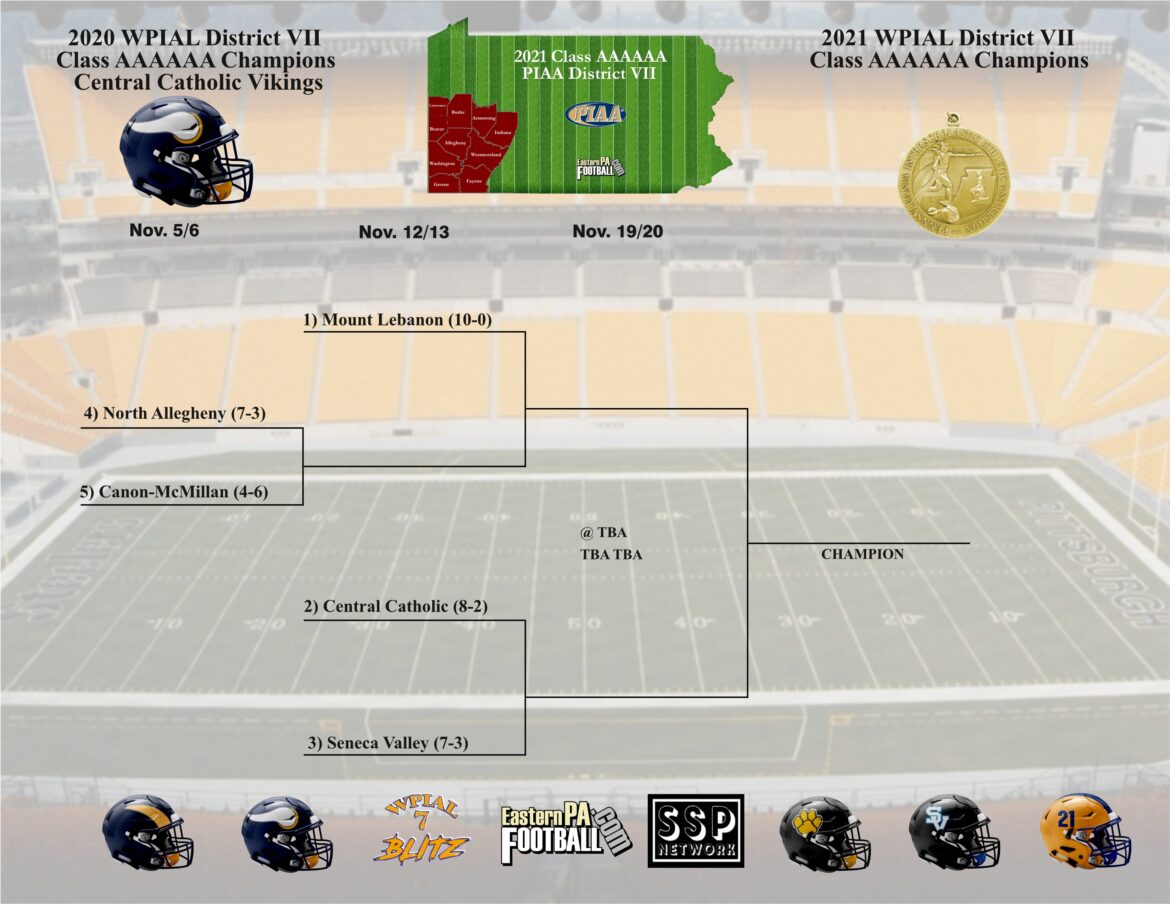 The WPIAL 6A playoffs will feature five teams. There was a 3-way tie for 5th place between Canon-McMillan, Baldwin, and Norwin which Canon-Mac won on Tiebreaker points. The bracket is seeded according to the order of finish in the conference. That said, the top seed has not always found success in the playoffs. North Allegheny was the top seed in both 2018 and 2020 and did not bring home the gold in either season.  Central Catholic is the two-time defending WPIAL Champions, but this year has been all about Mt. Lebanon. The Blue Devils ran through their schedule, defeating every team by 21+ points and earning their first conference title since 2010. The 6A Championship Game will be played on Saturday, November 20 at Norwin High School and is the only classification not playing their title game at Heinz Field (because they enter the state bracket a week earlier).

Check out the 6A Preview as part of this week’s WPIAL Blitz Show. 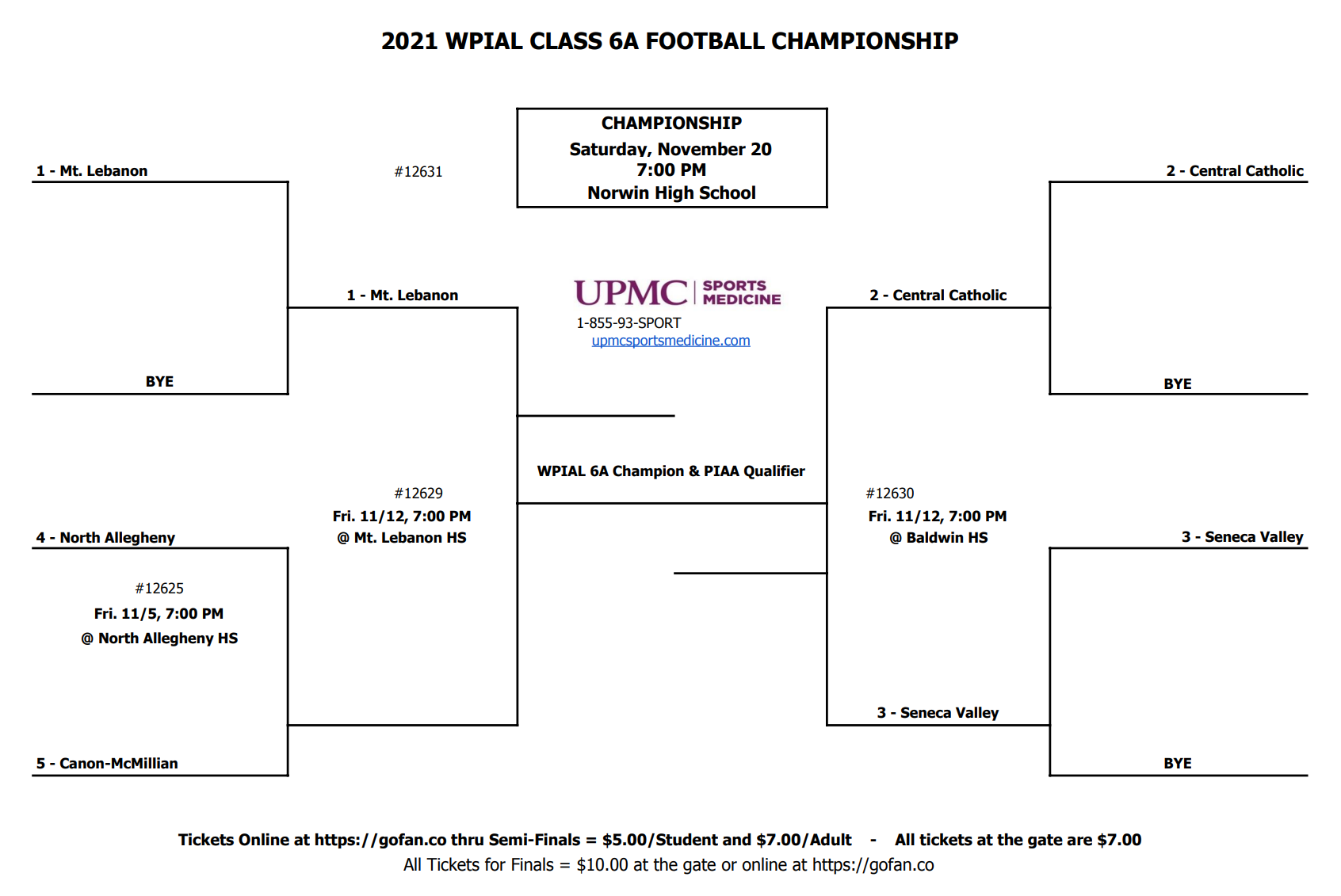 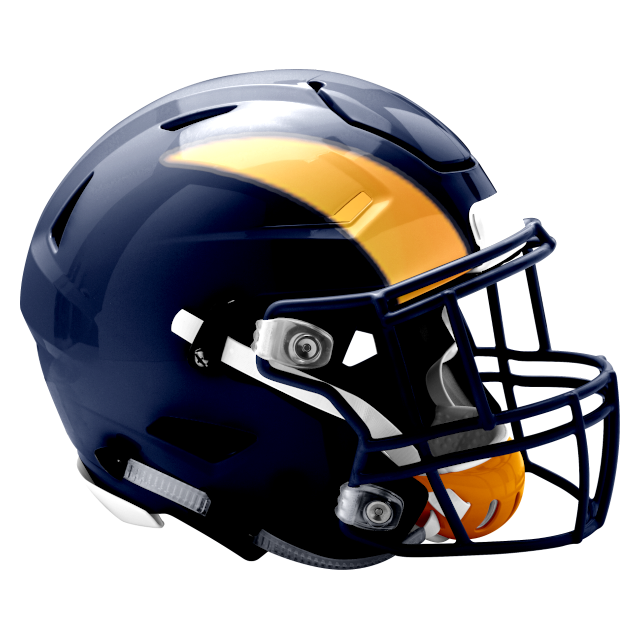 Mt. Lebanon Blue Devils
Conference Record: 7-0 Overall Record: 10-0
How they got here: Mt. Lebanon has absolutely dominated 6A this season. Their closest game was a 21-point victory over Central Catholic which took two days because of a lightning delay.  Mt. Lebanon has the highest-scoring offense (37 points per game) and stingiest defense (9 points against per game) in the classification. The Blue Devils have the leading passer (Joey Daniels), rusher (Alex Tecza) and receiver (Eli Heidenreich) in 6A.
Recent History: Mt Lebanon is making their 20th playoff appearance in the last 23 years. With the bye to the semifinals, this will be their fourth straight semifinal appearance. The Blue Devils have not made it to the WPIAL Championship game since winning the title in 2000.
WPIAL Playoff Appearances: 41
All-Time WPIAL Playoff Record: 40-33-0
Best Playoff Result: Won WPIAL Championship in 1966 (AAA), 1970 (AAA), 1980, 1981, 1983, 1984, and 2000. Lost to Erie Prep in the PIAA semifinals in 2000. 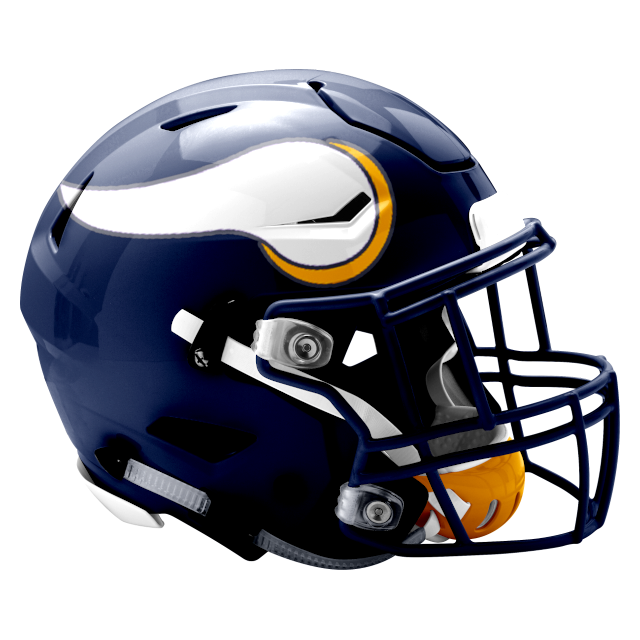 Central Catholic Vikings
Conference Record: 6-1 Overall Record: 8-2
How they got here: Central Catholic started the season with a loss to Imhotep Charter in a defensive struggle. Their only loss to a WPIAL opponent came against Mt. Lebanon.
Recent History: Central Catholic is making their 19th consecutive playoff appearance. The Vikings are the two-time defending WPIAL 6A Champions, defeating North Allegheny 38-24 in last year’s title game. The Vikings have won 5 of the last 8 WPIAL titles.
WPIAL Playoff Appearances: 28
All-Time WPIAL Playoff Record: 49-19
Best Playoff Result: Won WPIAL Championships in 2003, 2004, 2007, 2013, 2015, 2016, 2019, and 2020. Won PIAA titles in 1988, 2004, 2007, and 2015. 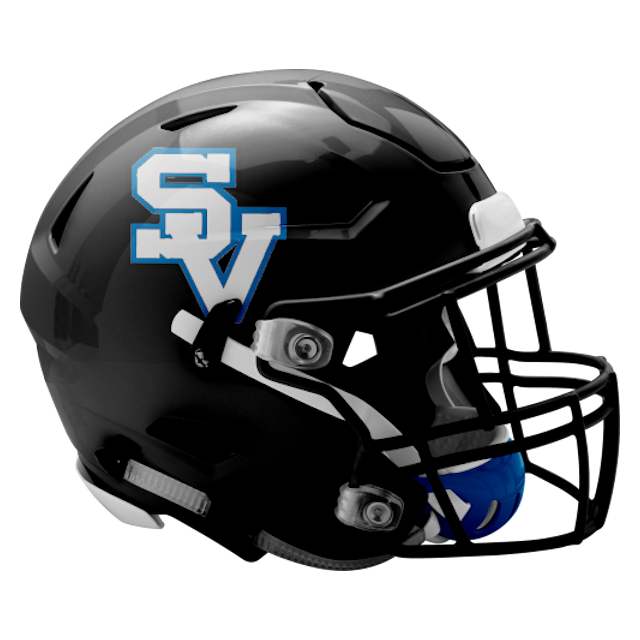 Seneca Valley Raiders
Conference Record: 5-2 Overall Record: 7-3
How they got here: Seneca Valley made a statement in non-conference play with a last-second  victory over Pine-Richland. The Raiders rebounded from a loss to Mt. Lebanon by beating rival North Allegheny in the final week of the season to earn the #3 seed and a first round bye.
Recent History: Seneca Valley is making their 9th playoff appearance in the last 11 years. They have reached the WPIAL Championship Game in two of the last five seasons, losing to Central Catholic in 2016 and Pine-Richland in 2018.
WPIAL Playoff Appearances: 16
All-Time WPIAL Playoff Record: 13-16
Best Playoff Result: Have reached the WPIAL Championship Game three times. In 1989 they lost to Aliquippa in the AAA Championship Game 17-9 and in 2016 they lost to Central Catholic in the inaugural 6A Championship Game 42-7. The Raiders fell to Pine-Richland in the 2018 WPIAL 6A Championship 34-7. 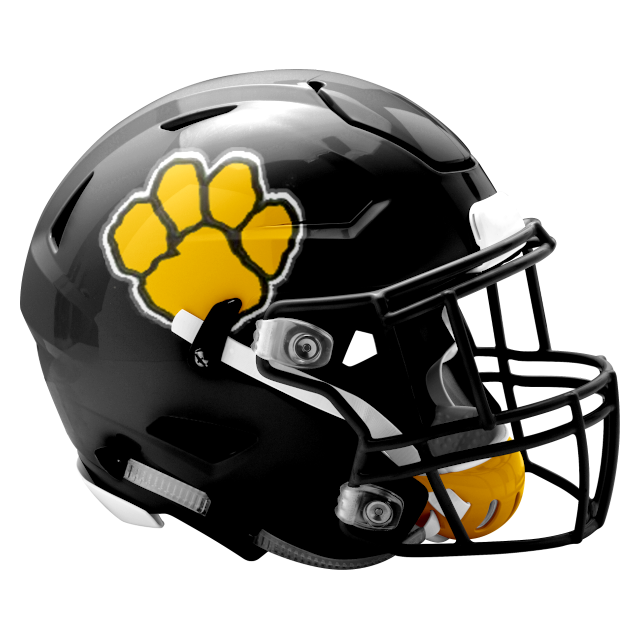 North Allegheny Tigers:
Conference Record: 4-3 Overall Record: 6-4
How they got here: It has been an up-and-down season for North Allegheny. The Tigers played three non-conference games against non-WPIAL opponents, beating Pittsburgh City League Champions Allderdice and splitting games with teams from Ohio. In conference play, they dropped back-to-back games to Central Catholic and Mt. Lebanon. Things looked back on track before they lost to Seneca Valley in the final week of the season and have to play a first round game.
Recent History: North Allegheny is making their 18th consecutive playoff appearance. After losing in the semifinals in four straight seasons, North Allegheny reached the WPIAL title game last year for the first time since 2012. The Tigers fell to Central Catholic in the Championship last year.
WPIAL Playoff Appearances: 35
All-Time WPIAL Playoff Record: 49-30
Best Playoff Result: Won WPIAL Championship in 1990, 2010, 2011 and 2012. Won PIAA title in 1990, 2010 and 2012 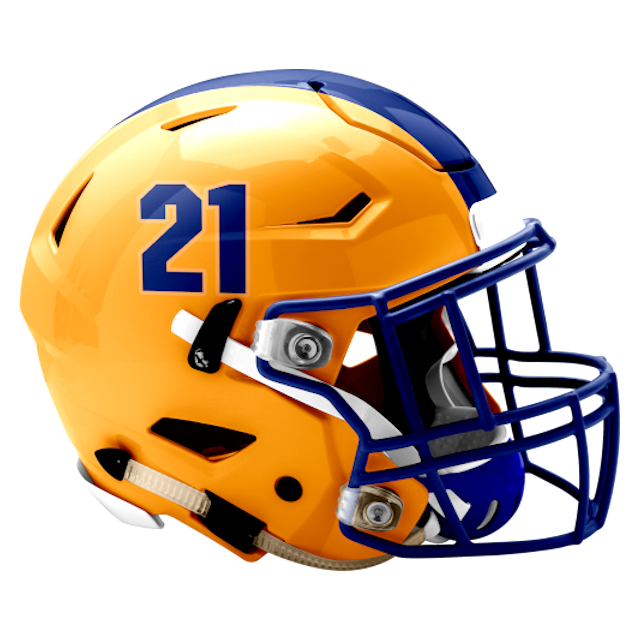 Canon-McMillan Big Macs
Conference Record: 2-5 Overall Record: 4-6
How they got here: Canon-McMillan had a strong start to the season with a non-conference win over Bethel Park and throttling Baldwin and Hempfield. Things turned sour in October and they lost their last 4 games, needing to win a three-way-tie with Baldwin and Norwin on Tiebreaker Points to get the final playoff spot.
Recent History: This is the third playoff appearance in four years for the Big Macs. They have not won a playoff game since 1991.
WPIAL Playoff Appearances: 11
All-Time WPIAL Playoff Record: 1-9-1
Best Playoff Result: Canon-McMillan’s lone playoff win came in 2004 when they beat Belle Vernon in the first round of the AAA playoffs. Canonsburg High School tied New Brighton in the 1950 Class A (which became AA) Championship Game.

Alex Tecza (RB – Mt Lebanon) – The leading rusher in 6A has a unique blend of vision, agility and a burst of speed that has made him a force to be reckoned with every time he touches the ball.

Joey Daniels (QB – Mt Lebanon) – Daniels leads 6A in passing and has been efficient and accurate all season, spreading the ball around to a number of different receivers.

Eli Heidenreich (WR – Mt Lebanon) – Heidenreich is a Navy-commit and has been explosive all over the field. He has shown the ability to take short passes all the way, to make leaping grabs over defenders, and to get open down the field.

Donovan Hinish (DL – Central Catholic) – The Notre Dame-commit has been a force on the interior of the line all season, basically living in opponents backfields.

Anthony Speca (LB – Central Catholic) – Speca is only a sophomore and is already being talked about as one of the top linebackers in the WPIAL.

Luke Lawson and Brandon Ross (WRs – Seneca Valley) – Eli Heidenreich led 6A in receiving yards, but Lawson was the leader in total receptions. Seneca Valley has the best tandem of receivers in 6A, which has enabled both of their quarterbacks to be successful – initially Graham Hancox and then Sean O’Shea after Hancox was injured. 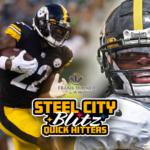 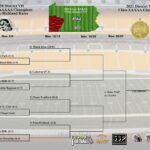