Why the Steelers Should Go Wideout in Round One 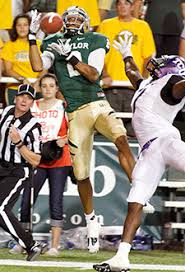 This is part one in a series from steelcityblitz.com arguing the reasons why the Pittsburgh Steelers should take a specific position with the 17th pick in the first round. Today is a look at wide receivers.

I like Antonio Brown and I like Emmanuel Sanders. I like their energy and their speed and ability to make plays, but I’m not sure I like them as my one and two wide receivers. Both players unfortunately took a step back in 2012 and we can point to any number of reasons as to why but they did and that’s a fact.

Both guys made crucial turnovers at the worst possible times and in some cases were not under duress. Although some are questioning whether paying Brown prior to the season was a smart move, if the Steelers can land a sure-fire #1 receiver then that money to Brown doesn’t look so bad.

The reason Mike Wallace had value was simply because of his speed but that’s pretty much where it stops with him. He is not a great route-runner and he does not fight for the ball or positioning at all. We can argue whether he was used properly during his four years here but that doesn’t dismiss his faults.

Ask yourself this question when talking about Wallace or Brown for that matter as a number one wide receiver; Would either of those guys have made catches that Julio Jones, Roddy White, or Anquan Boldin made this past weekend? Granted, two of those three are not playing in the Super Bowl but it certainly wasn’t for lack of trying and making exceptional plays. Those are plays that #1 wideouts make.

This is exactly why the Steelers need to land a big-time wideout in the draft and if that means moving up then do it. The problem is, are there wide receivers in the 2013 draft worth moving up to get? Right now there are only a handful of receivers considered 1st or 2nd round talent. Keenan Allen of Cal and Terrance Williams of Baylor are considered the top two at this time, along with Tavon Austin of West Virginia, Deandre Hopkins of Clemson and Justin Hunter of Tennessee.

Austin is an intriguing prospect but his height at 5’9″ is probably going to take him out of the Steelers’ equation and Hopkins at 6’1″ might fall into that category as well. Allen and Williams are 6’2″ and 6’3″ respectively while the Vols’ Hunter is listed at 6’4″.

Why you go with a wideout is simple in the NFL today. You need to stretch the field and make defenses work not just from sideline-to-sideline but also vertically as well. You also need to score points too and not just 20 per game. If you aren’t averaging 25 points per game than you aren’t getting very far in the playoffs if you even make them.

With Heath Miller likely side-lined until the beginning of the season, Ben Roethlisberger needs more targets and needs more help. All five of the receivers I discussed have good to great speed which helps but having some physicality and size helps too.

If Pittsburgh sets their sights on one of these guys they may not have to move up to get him simply because as of right now, there isn’t a Jones or Calvin Johnson in the pool available. There is some solid depth here so a second round pick on a receiver could be likely if they don’t go there in the first.

Can the Steelers Learn From Today’s Final Four?

Motivation for Roethlisberger Should Not Be a...

So draft a tight end….heck draft two of them. I think the future of the passing game is to have two huge tight ends in the game at once. Think new England…..what team can stop Hernandez and Gronkowski when they’re both on the field? Speed is over-rated….you don’t need to stretch the field when your tight ends are so much bigger than the guys covering them.

It’s definitely a possibility. At 17, the Steelers may be forced to go ‘best player available’ and that very well could be a tight end. Guys like Gronk and Hernandez don’t grow on trees though.

Thanks for reading Robert. I’m seeing and talking to more people who think tight end is a possibility. With Miller likely rehabbing until the season opener it could be a good pick. Some solid talent available at the position like Ertz and Eifert.