Why Steeler Nation Should Be Excited About Diontae Johnson 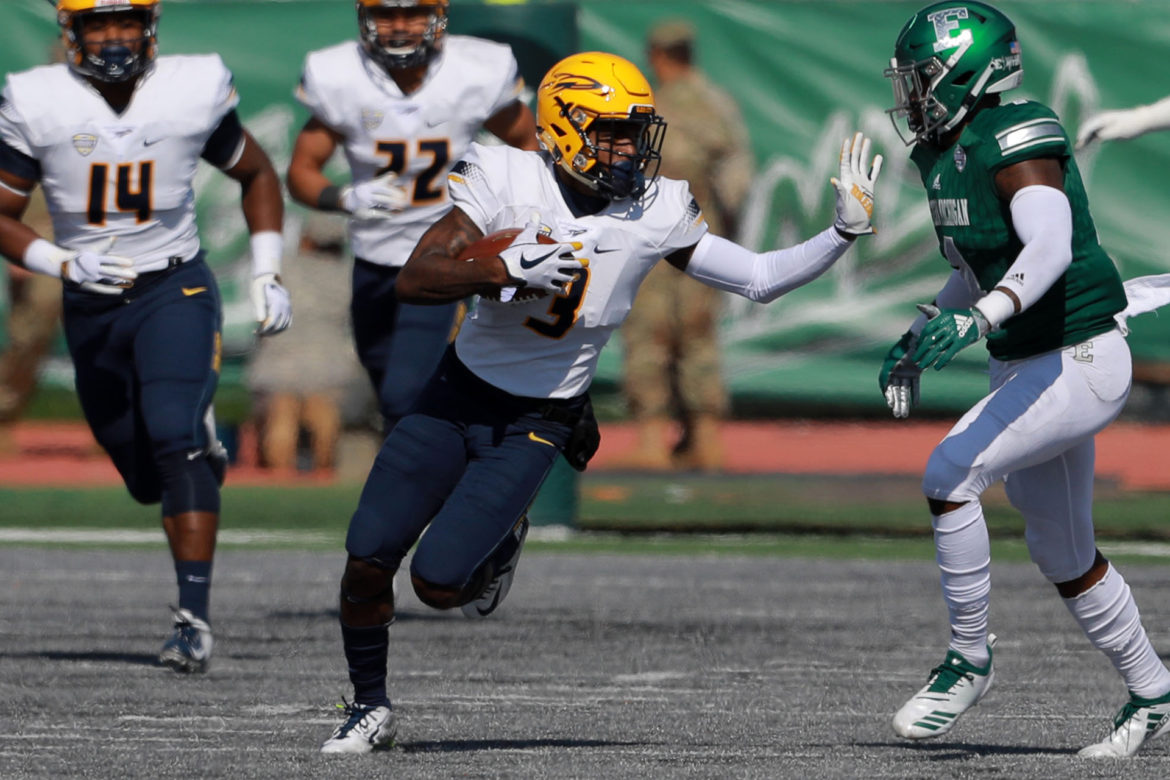 With the 66th overall selection in the 2019 NFL Draft the Pittsburgh Steelers selected explosive wide receiver Diontae Johnson out of Toledo. The pick, which was originally acquired via the Antonio Brown trade, is one I am super hyped about. This enthusiasm is shared by much of Steeler Nation, who trust in the organization’s ability to develop wide receivers.

Furthermore, Louis Riddick of ESPN provided his take on Johnson’s talents following the pick. He claimed that Johnson is, and I quote, “the best route runner in this Draft.”, which is high praise to say the least. But before we go overboard with joy, let’s take a look at his life and career prior to the NFL to see the making of the man behind the third round selection.

As well as his success on the field, Johnson achieved his major In Interdisciplinary Studies this year.

On top of that, he garnered multiple awards for his footballing ability in the three years he suited up for Toledo. These included:

– First Team All-MAC selections as a receiver and punt returner & Second Team All-MAC as a kick returner (2017), making him the first Rocket receiver to achieve that feat since 2011.

Johnson’s talent is there for everyone to see.

Statistically speaking, he was THE most prolific contributor on offense for his team. This is best evidenced by the fact that he led the Rockets in receiving yards in both his redshirt Sophomore and Junior campaigns. Those numbers are even more surprising, given the quality of quarterbacking available in his collegiate career.

In terms of his stature, Johnson is slightly under-sized for the position, as he clocks in just under 6 foot. That said, his catch radius remains rather large, especially for his size, whilst his slightly slender frame allows for explosive speed and acceleration which he used exquisitely this season.

My favourite aspect of Johnson’s game is his explosiveness. Whether that’s at the line of scrimmage, or on a shifty cut, Johnson can change direction with the upmost fluidity which he combines with speed. This led to consistent separation all throughout his 2017 and 2018 seasons specifically. Besides that, I would tie his route running ability to the best aspects of his game, given that he is so polished in his duties.

In addition to his explosiveness, Johnson possesses solid versatility, as he can be utilised in a variety of positions. Firstly, he’s a well-experienced punt/kick returner, whilst he’s compiled loads of snaps as a slot, ‘X’ or ‘Y’ receiver. It’s this versatility that I look forward to viewing especially, and will no doubt make for an interesting offseason as we approach the forthcoming NFL campaign.

The third and final section that pleases me regarding his ability as a receiver is his YAC prowess. When given just an inch, Johnson turns that inch into 10 yards, or so it would seem. He boasts excellent vision, whilst he has all the attributes to amass large yardage via his agility, quickness and determination to get downfield. If you don’t believe me, just glimpse at his average yards per reception produced, the lowest of which rests at 15.5 yards which he registered in 2018.

No collegiate prospect is ever the finalised product by the time they enter the league, and Johnson is no exemption to that rule. That said, I believe his concerns are fairly minor, but worth noting nonetheless. So, here goes:

In the tape that I have viewed, Johnson dropped quite a lot of passes, which reflected both negatively on himself and the quarterback. Some of those aforementioned drops would’ve been fairly easy for most NFL receivers, but it doesn’t worry me overly-much. This is due in large part to my faith in the Steelers’ coaching staff, who boast a proven track record when it comes to drafting, moulding and improving WR’s. Honestly, the work in the offseason will more than take care of Johnson’s somewhat shaky hands and I am almost certain his mechanics will be on point by the beginning of the regular season.

I would also like to see him add some weight to that frame of his in order to benefit his ability as a blocker. He’s got the hustle to succeed in that aspect of his game, but I feel a few added pounds make all the difference.

Let the record show that I am a HUGE fan of this selection. Johnson’s route running prowess is already at a very high level, whilst he is explosively quick in every aspect of his game. In addition, he consistently records big yardage plays through elite athleticism and agility. Luckily for us, I believe his small school status contributed to his slide in the 2019 NFL Draft, which means we get to add another fantastic piece to our receiving core ahead of the upcoming season.

The thing I am most intrigued by more than anything else is the coincidences about this selection. As previously alluded to, the pick came via the Antonio Brown trade, who also hailed from an MAC team, and whom also ran a similar 40-yard dash time (4.55u). Could Diontae Johnson be the next AB?

I’m going to be honest, I don’t like the pick. There were better players on the board [ Mclaurin and Boykin ]. And why draft another slot guy don’t we have a few of them already. I’m not a big fan of this draft i like the Bush and Layne picks but after that i think we swung and missed on some. It will take 3 years but i think i’m going to be saying ” i told you so”. Picking Bennie Snell over Trayveon Williams is another example. I’m still a Steeler fan but it ain’t 1973 and finding superior talent at the small schools just ain’t that easy.

[…] Greg explains why Steeler Nation should like Diontae Johnson. […]

Was Hakeem Butler that bad. What’s not to like about 6-6 and sub 4-4 speed. Also a huge catch radius with solid ball skills. Do we miss AB so much we fall in love with a potential clone. SMH. I guess Big Ben didn’t get any consideration here.