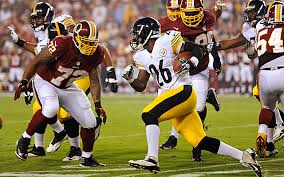 There are few debates surrounding the Pittsburgh Steelers that get people fired up as much as the one over the ‘Steeler Way.’

For purposes of this discussion I shall focus on both because one leads to the other. Steeler fans typically fall on one of two sides these days on many issues and when it comes to the offense they fall on running the ball versus passing the ball.

Confusion on this matter is often the result of talking heads that get inside the mind of Steelers’ fans and such was the case this morning. ESPN’s Mike and Mike in the Morning opened with the game as they normally do and both Mike Greenberg and Mike Golic talked about how “this isn’t how the Steelers do things.”

“The Steelers are known for defense and ground and pound,” said Greenberg. “They aren’t doing that and therefore aren’t successful.”

So let me get this straight. Because the Steelers of the 1970’s and through much of Bill Cowher’s years were ‘run-first’ teams, that means this one has to be also?

Why is every other NFL team allowed to change the ‘way’ they do things offensively except for the Steelers? If getting back to the run is truly what the ownership and coaching staff want to do then trade Ben Roethlisberger to a team looking for a QB and get some linemen in return.

Bruce Gradkowski can hand the ball off 45 times per game as well as Roethlisberger can so why wait Kevin Colbert? Make the move.

The bottom line is that the two opposing sides in this debate aren’t willing to compromise. It’s either ‘be a running team or be a passing team’. Why can’t it be both? Why can’t the pass set up the run?

Three straight runs to open the game on offense last night had to have the ‘ground and pounder’ club praising the spirit of the Chief despite having to punt. You have a $100 million quarterback and you’re paying him to hand off.

Worse yet, the running game is non-existent because this offensive line is still not on the same page. Le’Veon Bell coming back is not going to suddenly bring back the days of Rocky, Franco or the Bus. Sadly, there is a massive group of Steeler fans who believe otherwise.

The “Steeler Way” is not working and it hasn’t for several years now. It’s time to look in the mirror, accept who you are and make the change.  The identity crisis needs to end.

Miller’s Return Will Solve Some Issues, But Not All for Steelers

Are Steelers’ Fans Assuming Too Much With...

Steelers’ Mini-Camp is a Primer for the...

Well, the first 3 plays just about had me turn off the TV set?

I think I’ll apply for the offensive coordinator job, cause I would be a lot less “offensive”!!

At least we’ll be high on draft pick for 2014, if the front office can figure out a good pick.

What a joke the Steelers have become, the Looney’s wont can Tomlin or Haley out of spite towards the fans, its obvious Tomlin is nothing but a silver tongued do nothing, kind of reminds me of Obama, anyway, Haley’s offense is nothing but offensive, and the drafted talent, what talent other than Jarvis jones, they should play moye and wheaton, sanders and brown just aren’t up to the task, I predict 4-12, unless something short of a miracle pops up and Tomlin turns into a genius, but I don’t see him being anything but the silver tongued bonehead who says we gotta fix this and that, and then the next Sunday nothings fixed and its same ol same ol, go Steelers.