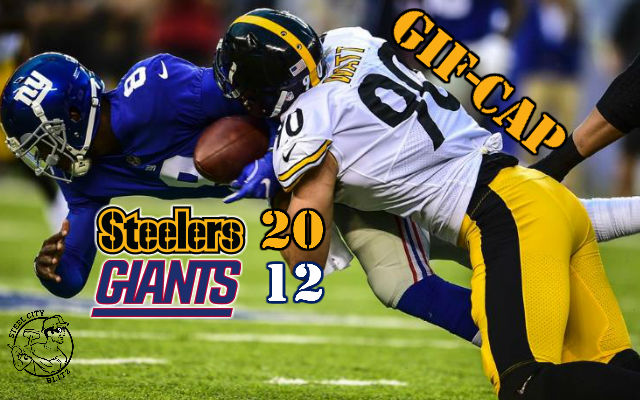 The Pittsburgh Steelers played a football game on Friday night. Yes, it was a preseason game and relatively meaningless but damn was it good to see football on TV again.  Tonight’s game gave us the full range of emotions from a downtrodden first quarter to  the team battling back and taking the lead by halftime.

The game started slow with the teams trading 3-and-outs but picked up when TJ Watt recorded his “first” career sack (but not really first because stats in preseason games don’t count). Watt got another sack on the Giants next drive as he came unblocked off the edge.  Unfortunately Josh Dobbs threw and interception on the first play of the Steelers ensuing drive on a badly underthrown ball.

The Giants were able to convert that into a field goal on a short field. The defense did make a nice stand in the red zone to hold them to 3. Dobbs came back and the offense got their first first down of the night but Dobbs threw another interception.

The Giants kicked another field goal to take a 6-0 lead and people were ready to pack it in on the Josh Dobbs experiment. More than one person even said something good about Landry Jones on Twitter. That’s saying something.  Dobbs started by using his legs to scramble for a first down then was able to overcome a holding penalty by throwing a bomb to Cobi Hamilton where he made a great leaping grab away from his body. The Steelers didn’t do much else but were able to put 3 points on the board.

The Giants drove back down into field goal range with Geno Smith picking apart the Steelers second-string defense. Mike Hilton got a sack on a corner blitz on third down to hold the Giants to 3.

The Steelers went 3-and-out but the Giants fumbled the punt and Mike Hilton recovered. On the next play, Dobbs went for the jugular and dropped a pass right into the breadbasket of Cobi Hamilton who had blown past Antwon Valentino Blake. And just like that we had the lead!

The second half started much the same as the first half had ended, with Geno Smith doing work against the Steelers backups. Another field goal put the Giants back in the lead 12-10.

It looked like things were about to settle into the normal preseason drivel, but Arthur Moats came up with a big interception to set us up in the red zone. That woke us up fast.

Josh Dobbs made his most impressive play of the night on a third down where he was able to step away from pressure then re-set his feet and find Xavier Grimble in the middle of the end zone. Unfortunately it was called back on a holding penalty, but that doesn’t take away from the play Dobbs made. The Wizard of Boz put us back in the lead.

Bart Houston came in at quarterback for the Steelers at the tail end of the third quarter. At this point, NFL Network dropped the coverage to switch to the Chiefs game and everyone outside of Pittsburgh had a meltdown.

Sheriff Bart led the team down the field, converted a few third downs, and Terrell Watson finished it off with a 15-yard run over the left side thanks to a great pull block from reserve TE Jake McGee.

From there, it was a routine close-out of the game. With the Steelers short on outside linebacker depth, Arthur Moats was forced to play late into the game and absolutely balled out against inferior competition. He had his own personal sack party with 3 in the fourth quarter in addition to a number of other pressures. The Steelers wound up with 7 sacks on the night, an impressive total for any game much less a preseason one where they were playing fairly vanilla defense.

Davis Webb came in for the Giants, who they had taken in the third round, 48 picks before the Steelers took Dobbs. Webb looked terrible so any bad feelings you had about Dobbs’ start made you feel a little better that we didn’t wind up with Davis Webb. As a cherry on top of his fantastic game, Mike Hilton came up with a tackle for loss on a 4th and 1 to essentially end the Giants chances of winning. Most importantly, no one got seriously injured in this out (outside of JuJu Smith-Schuster’s concussion).

The guy in the green shirt looks a Browns fan waiting for a first down.