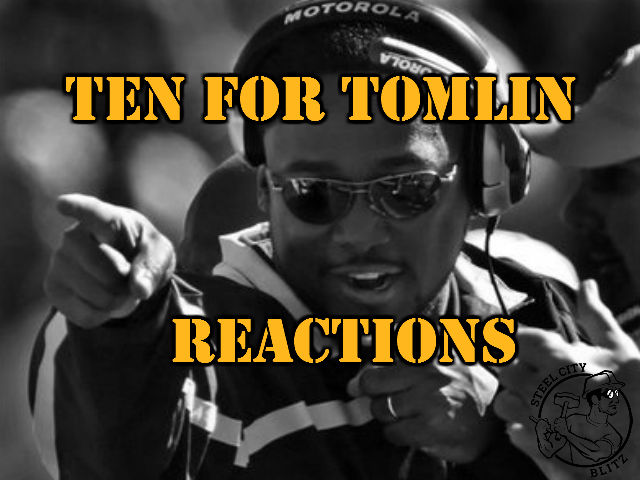 The 2017 Season will be Mike Tomlin’s 11th as the head coach of the Pittsburgh Steelers. With his decade at the helm, he is currently the fifth-longest tenured coach in the NFL. Only Bill Belichick, Marvin Lewis, Mike McCarthy, and Sean Payton have been in their respective positions longer than Tomlin. As we count down the days until the start of Training Camp and the start of the 2017 season, we’re taking a look back at Mike Tomlin’s 10 year tenure as Steelers head coach. The “10 For Tomlin” series will be 10 posts each featuring 10 items from the past decade. We started by looking at key statistics and recapping the best games and worst games. Yesterday, we turned our focus to the player-personnel side with the best draft picks and best free agents. Today we shift gears from serious analysis to a fun topic: Mike Tomlin’s reactions. As head coach, he certainly wears his heart on his sleeve and has produced some great reactions in his tenure.

Going after Bengals safety Reggie Nelson after he injured Le’Veon Bell in the season finale. Tomlin stood up for his players and wasn’t afraid to get right in Nelson’s face.

One of the great things about Mike Tomlin is he never cares about the weather. 95-degree summer day? Long sleeve black shirt. Snowy in the winter? Sunglasses.

That grin after he stepped in front of Jacoby Jones’ kick return. Yeeeeeah.

The clap is one of Tomlin’s signature moves. He does it in any situation whether it’s as a celebration or a “let’s keep this going” or as a “come on guys let’s turn things around.”

Tomlin isn’t above reacting like everyone else to a terrible call though.

Even scarier than “bad call” Tomlin is “stoic anger” Tomlin.

This might be my favorite Tomlin reaction because “Go for One’ means we’re kicking the extra point and not chasing points by trying a two-point conversion at an unnecessary time in the game.

Fist Pump Tomlin is one of his favorite celebrations. Also known as “We did our jobs.”

Tomlin isn’t above celebrating with his players either. This chest bump with Ben after Deshea Townsend’s pick-six of Tony Romo in 2008 is a classic.

Of course, there’s always this Tomlin classic of pounding his chest and pointing to the camera. He sees your criticism and doesn’t care.

[…] side with the best draft picks and best free agents. We also took a look at some of our favorite reactions. Today’s focus is on the men who have assisted in the development of players and schemes for […]

[…] who have helped Tomlin on the sidelines along the way. We also took a look at some of our favorite reactions. Today’s focus is on the men who have been an absolute thorn in the side of Tomlin’s […]