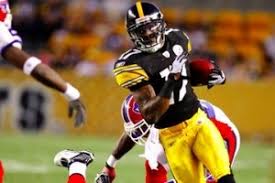 I find it almost humorous how quickly articles can change in my mind through the course of a Pittsburgh Steelers’ football game. There were so many things to be critical of as the game wore on yesterday as the Steelers seemed headed for a third straight loss. Despite the fact they won yesterday, I can’t sit here today and wax poetically about everything I saw.

In my mind, Mike Wallace is playing his last games as a Pittsburgh Steeler and it goes much deeper than just a guy who pouts when he doesn’t get the ball. Wallace and his fellow receivers Emmanuel Sanders and Antonio Brown dubbed themselves the ‘Young Money Crew’ a few years ago. While it’s a cute little nickname that many thought would be justified, I can say with full confidence that the moniker is far from accurate.

While the trio came up big late in the game with a couple of very key receptions, the bulk of the game bore out their mistakes which could have easily cost the Steelers the game.

Sanders was far from ‘money’ yesterday as he literally dropped the football at mid-field after Charlie Batch hit him with a perfect strike. Sanders could have cart-wheeled to the end zone he was so wide-open yet fumbled the ball away. The Ravens would take the lead on the ensuing possession. He would also have a couple of drops in the game and has turned it over in two straight.

Wallace continued his spoiled brat behavior with less than good routes. If Wallace spent as much time giving effort for receptions as he does whining about pass interference calls then he’d be Jerry Rice re-incarnated. I’m starting to wonder if his childish antics aren’t starting to rub off on Sanders a bit who seems to be acting like Wallace more and more.

Brown bears less responsibility than the other two in the ‘crew’ because he has been injured but he did make plays yesterday and one really bad one. I don’t care what level of football you’re playing at, when coaches design plays for ‘non-quarterbacks’ to throw the football there is always one and only one rule; If the receiver isn’t WIDE open, you don’t throw it.

Brown had absolutely no business throwing that ball and the play-calling didn’t exactly help him either. I like Jonathan Dwyer, but was he the best choice to be on the receiving end there? Was throwing back across the field a good idea as well? Either way, Brown has to have better judgement than that.

Perhaps this article bears less weight because the Steelers pulled out an outstanding victory last night, but not in my mind. If the Pittsburgh Steelers are truly going to make a run at the playoffs and the Super Bowl then these guys need to take better care of the ball and have a little more discipline on the field.

If they can’t, the ‘Young Money Crew’ just might owe us all a refund.

Three Keys for the Steelers’ Offense in...

[…] ‘Young Money Crew’ is almost becoming its’ own punchline. If ever you could say one man cost his team a game […]