Steelers’ Woodley Has a Point About the Pass Rush 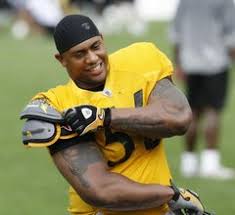 I’ve been as hard as anyone on LaMarr Woodley and I suspect much of what I write hear will not sound much different with a couple of exceptions. Woodley spoke to the press today and offered some interesting tidbits following a season in which he was injured and under-performed for the second-straight year. Here are a few snippets…

On his conditioning… He claims he didn’t do anything different this year, training-wise, this offseason to address his groin or ankle.

On getting to the quarterback… He stated that last year he was asked to be in coverage more which is why he believes his sack numbers were down.

On loss of James Harrison… Woodley said that when he and James were in there they average double-digit sacks. When he or me (Woodley) weren’t we didn’t.

Thanks to Chris Adamski who you can follow on Twitter at @BuzzsawPGH for the info. Thanks also to Chris from Bleacher Report, who will be my guest The Blitz podcast tomorrow night, for the info from today’s workout.

Here’s my take on Woodley’s comments. First of all I agree whole-heartedly that he should be rushing the passer a hell of a lot more than he should be in coverage. While I, and certainly he, understand that dropping into coverage is part of Dick LeBeau’s 3-4 system, there is nothing worse than seeing Woodley and Harrison (in previous years) not rushing the passer.

With that said, Woodley can make no excuses when he does rush the passer. He needs to get after it one way or another.

Woodley makes a valid point as well about James Harrison being on the field but now we must assume that person to be either Jason Worilds or Jarvis Jones. Outside backers’ thrive on each other flushing the QB to other’s side. With no push from the right, Woodley will see his sack numbers decline but I think Worilds will create opportunities for Woodley.

I do have to question Woodley a little bit in terms of conditioning. With the money he is making, I would think he would want to do everything possible to make sure he is healthy and addressing the issues that kept him out of games last year. That seems a bit nonchalant and even arrogant in my opinion. I certainly hope injuries to his problem areas (groin, hamstring and ankle) don’t haunt him again.

Other Notes from today’s practice…

*Mike Tomlin after practice on Demarcus Van Dyke’s hamstring injury. “It could be significant.” I’m guessing this could be the end for Van Dyke.

*Chris reported that Special Teams’ Coach Danny Smith was working with the guys on stripping the football. Hallelujah! This has been missing for years. Need to increase those turnover opportunities on special teams.

*Defense was very good against the run, especially to the right.

*Willie Gay got beat a couple of times. Once deep by Antonio Brown and another by Plaxico Burress down the middle.

In case you missed it, the annual night scrimmage at Latrobe High School has been moved to an afternoon scrimmage back at St. Vincent’s. The high school field is in rough shape and the team didn’t want to make it worse for the high school team heading into their season.

Let’s Get All the Info Before Judging...