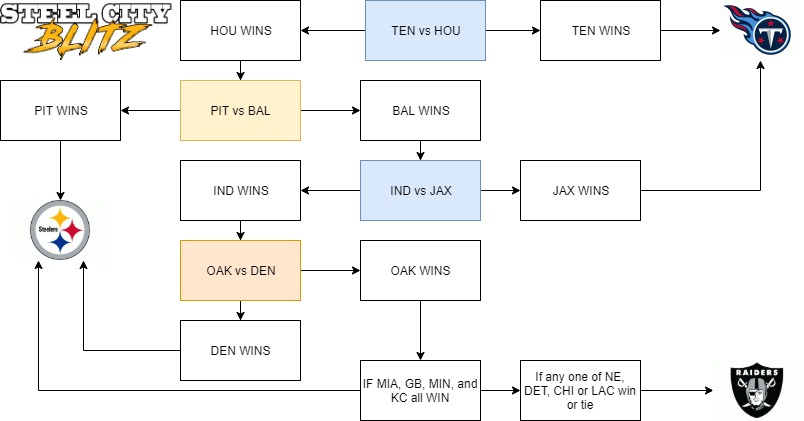 With the Steelers loss to the Jets, their playoff hopes are now in a precarious position. Sitting at just 8-7 on the season and tied with Tennessee for the final wild card spot, the Steelers can make it in with either a win or a loss against Baltimore, provided they get help from other teams around the league. With the potential for resting starters from teams with secured playoff position, no results in Week 17 are guaranteed. Tennessee (8-7), Pittsburgh (8-7), and Oakland (7-8) are all alive for the final playoff spot. Indianapolis (7-8) is mathematically eliminated but still has the opportunity to spoil the chances of division rival Tennessee. Here is a breakdown of all of the possible playoff scenarios.

Divisional ties are always broken first (this will be important later). After that, tiebreakers are head-to-head, conference record, record in common games, strength of victory, and strength of schedule. Other tiebreakers that are rarely used come into play after that, which I will address later.

If the Steelers beat the Ravens and finish 9-7, Oakland is eliminated. The 6th playoff spot would then come down to Pittsburgh or Tennessee.

If Pittsburgh loses to Baltimore

A Pittsburgh loss to Baltimore would put the Steelers at 8-8 and their playoff hopes in serious jeopardy. That said, after the Steelers previous loss to the Ravens when they sat at 1-4, an 8-8 finish seemed highly improbable. With a Pittsburgh loss, Tennessee can earn the final wild card outright with a win over Houston. The only scenario where the Steelers can lose and still have hope is if the Titans also lose.

If the Titans lose, the scenarios start to get dicey. This brings Oakland and Indianapolis into play. If Indianapolis loses to Jacksonville, Tennessee will get the final Wild Card spot regardless of Oakland’s result.

However, a Titans loss and a Colts win over Jacksonville would put both the Titans and Colts at 8-8. As mentioned at the outset, divisional tiebreakers are always settled first. This would vault Indianapolis (4-2 divisional record) into second place in the South above Tennessee (2-4 divisional record in this scenario). Indianapolis has head-to-head losses to both Pittsburgh and Oakland, so the Colts can not make the playoffs, but a win over Jacksonville and a Titans loss would eliminate Tennessee.

With a Titans loss and Colts win, the final spot would come down to Pittsburgh or Oakland. A Raiders loss to Denver would put the Steelers in the playoffs, winning a 3-way tie with Tennessee and Indianapolis at 8-8. A Raiders victory would bring a more complicated scenario into play.

In this scenario, four teams would be tied at 8-8. As discussed previously, Tennessee would be eliminated because of the divisional tiebreaker with Indianpolis (the Titans and Colts split head-to-head). Pittsburgh and Oakland both beat Indianapolis head-to-head, so the Colts would also be eliminated. The tiebreaking scenario then comes down to Pittsburgh vs Oakland.

Not applicable. The Steelers and Raiders did not play this season.

Both teams would be 6-6 against AFC opponents.

Since both teams have defeated a team with a tied, this boils down to teams Pittsburgh beat having 37 wins and teams Oakland beat having 40 wins. Let’s look at the other Week 17 games to see if there is an opportunity for Pittsburgh to improve:

This is a measure of the overall record of all 16 of a team’s opponents. Currently, Pittsburgh and Oakland are tied with a .478 Strength of Schedule. Tonight’s Monday Night game will have no impact on this as Oakland played against both Green Bay and Minnesota. Unless tonight’s game ends in a tie, both teams will have a strength of schedule of .478 with opponent’s total records of 107-117-1.

However, given that the Steelers face Baltimore (13-2) in Week 17 and Oakland plays Denver (6-9), the Steelers have the opportunity to pull ahead in this metric. In order to simply get to this scenario, the following teams all have to win: Baltimore, Houston, Indianapolis, Oakland, Miami, Green Bay, Minnesota, and Kansas City. If all of those results happen, the Steelers’ opponents will be 129-126-1 (.506) while best the Raiders’ opponents can finish is 121-134-1 (.475). In this scenario, the Steelers would get the final playoff spot in the AFC.

In conclusion, every scenario for Pittsburgh to make the playoffs requires a Tennessee loss. That game against Houston is the most important one this weekend. The simplest scenario for Pittsburgh to make the playoffs is to win and have the Titans lose. But if the Steelers lose, there are still paths available to make the playoffs, provided Tennessee also loses. An Indianapolis win would eliminate Tennessee and put the Steelers in the playoffs if Oakland loses. If Indianapolis and Oakland both win, Strength of Victory (or potentially Strength of Schedule) will settle the tie between Pittsburgh and Oakland. A loss by the Colts, regardless of what Oakland does, puts the Titans in the playoffs. The Steelers have seen themselves in playoff scenarios where they needed other teams to get certain results in previous seasons. Sometimes it has worked and some times it has not. If there is anything we know, there are no guaranteed results, particularly in Week 17 of an NFL season.