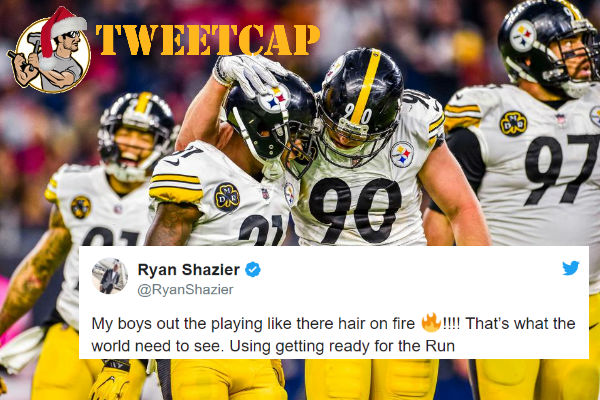 For the second straight year the Steelers played a game on Christmas Day. Last year, the AFC North title was on the line against Baltimore in Heinz Field. This year, they took on the struggling Texans but with the opportunity to clinch a first round bye after Jacksonville’s loss to San Francisco.

The Steelers started strong, driving right down the field but stalling out in the red zone. Of course, that meant ample opportunity for Twitter’s favorite joke.

Al Riveron thinks that is not a field goal #Steelers #PITvsHOU

Hold on a sec, Al Riveron wants a review of the Boswell field goal to see if the ball survived the ground after passing through the uprights

Great drive for Vance McDonald. Two nice catch and runs plus a great block on Bell run. No AB threat in red zone will be struggle for #Steelers.

Earlier this week, I wrote about Houston’s bad pass protection. It came up in a big way today.

"Okay guys it's okay to throw holding calls today. It's not NE"-Refs ?

Mike Hilton off the edge…Steelers been working that slot corner blitz all year. Hilton has a knack for timing it up.

The offense kept rolling with a bomb to Martavis on third and short.

No AB. No problem. Or the Texans just suck.

Thought Ben was bad on the road? That’s what Aditi and the Depot told me.

Did you know? The Watt’s are brothers.

How has nobody mentioned this until now?

Momma Watt’s shirt is such a mom shirt. And I love it.

Justin Hunter is the 10th different player Ben Roethlisberger has thrown a touchdown to this season.

Another review resulting in something weird happening, but this review got the ruling right.

Back to the Future: Steelers start second quarter by going back to first quarter, after a review overturned a catch #MerryChristmas

now if that was a Patriot player catching that ball, they don’t overturn it. Chances are they find a way to say Houston can’t even challenge it

The Texans would get down to the goal line but would crap all over themselves.

Those two play calls are by far the dumbest sequence of plays I’ve seen all season.

BREAKING: Artie Burns Interception in the endzone has been reversed and the Patriots now have a touchdown

The Steelers drove it back down the field and Rosie Nix punched it in.

The defense made another splash play with Cam Heyward forcing a fumble on a strip sack.

With less than 2 min remaining in first half, T.J. Yates has a Blutarski-esque 0.0 passer rating. Inaccurate, inefficient and horrible no way to go thru the NFL.

Boswell put points on the board.

With :53 left in the first half, Chris Boswell kicks another FG to make the #Steelers lead 20-0 now.

AFTER THE STEELERS FINISH KILLING THE HOUSTON TEXANS THEY WILL THEN DESTROY THE ARLEN HIGH SCHOOL ARMADILLOS AND THEN END THE TOM LANDRY MIDDLE SCHOOL LONGHORNS.

The second half didn’t start so well for the defense as Houston seemed focused on running the ball. Hard to blame them after TJ Yates left the game with concussion-like symptoms.

Thankfully, Mike Hilton came to the rescue once again.

3 sacks for Mike Hilton. What a game for him. And season. #Steelers

The #Texans haven’t been so great at picking up Slot CB Blitz!

HIS NAME IS MIKE HILTON

The first DB to have three in one game since Troy Polamalu in 2005 per @drinelli.

This qb is hoping Yates is ok

Houston is a depleted team, but this is the kind of performance we want to see more often from the Steelers as a heavy road favorite.

Things went from bad to worse for Houston when a sack turned into another positive play for the Steelers.

Ben gets a call wow.

I respect Clowney owning up and talking about the facemask with Ben. You saw Ben smile after it. I respect that a lot.

Bell didn't survive the ground, but he doesn't have to because he isn't a receiver, but a runner. #SurviveTheGround

If anything, the Steelers won the title for best touchdown celebrations this season.

Haven’t felt this relaxed during a Steelers game in a long time. Texans are awful and the Steelers were pretty focused after all. Fixing the run defense has to be a priority though.

Houston went down the field and scored on an absolutely ludicrous catch by DeAndre Hopkins. Nothing Joe Haden could do there, Hopkins just made a great play.

JuJu came back and made it count by hauling in a bomb from Ben then made a nifty move over the middle to get wide open for an easy score.

@TeamJuJu loll JUJU ON THE BEAT!!!

From there, it was all routine to just run out the clock.

A #Steelers game which doesn't cause me to have a heart attack was a tremendous Christmas present!

It was a good day for the defense.

That's 7 sacks for the Steelers tonight. Houston's QBs have 8 completions.

Sack #50 on the season for this defense. Whew

#Texans QBs were sacked on 30% of their drop backs. #Steelers

Steelers we’re rocking around the Christmas tree as they beat the Texans 34-6 to clinch at least the 2 seed in the AFC playoffs & a 1st Rd bye. #Steelers

My boys out the playing like there hair on fire ?!!!! That’s what the world need to see. Using getting ready for the Run

So, with this #Steelers win they secure a bye in the AFC playoffs. Next week Pittsburgh will need to win vs Browns + a Patriots loss to the Jets to get the 1 seed.