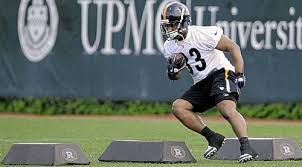 As day two of the Pittsburgh Steelers 2013 Training Camp unfolded, it was apparent from reading the tweets from many of the Steelers’ scribes and fans on hand that there have definitely been some changes.

Among those changes were the increased arm size of Isaac Redman, the incredible build of rookie Shamarko Thomas and the ‘thickness’ of rookie Markus Wheaton. QB Ben Roethlisberger also looks to be in great shape and verified as much in an interview with Trib-Live’s Alan Robinson. Roethlisberger claims he is in the best shape of his football career.

That is certainly great news in terms of him staying healthy.

LaMarr Woodley was also looking more fit than in past years second year tight end David Paulson has defintely bulked up as well.

As we learned last year with Ziggy Hood, having a great physique and being in great physical shape does not always translate to great results on the field but at the very least, this is a sign that this team is taking a different approach in 2013.

Other tidbits from day two…

*Both John Malecki and Kelvin Beachum did some work at center. Rookie free agent Mike Golic, Jr did as well at the end of practice.

*As expected Mike Adams participated and showed no signs of the injury suffered earlier this offseason when he was stabbed.

*Tomlin got after rookies Bell and Wheaton a couple of times today which is pretty standard procedure for Tomlin.

*According to Mark Kaboly, Emmanuel Sanders beat William Gay deep and suggested there may be a deep threat after all without Mike Wallace.

*Signs that Cam Heyward could see action at both defensive end spots was evident today.

*Chris of Bleacher Report mentioned that the Steelers had changed the way they stretched and prepared for practice. That is not a surprise since injuries and poor conditioning were called into question by Steelers’ Chariman Dan Rooney during the offseason.

*Ben Roethlisberger showed no signs that the knee operated on in June was bothering him. Desptie claims from Tomlin that he had some ‘discomfort’ Roethlisberger said he feels great.

Again, thanks to everyone spitting out tweets and emails in order for those of us not yet on location to get some insights.

More Ben-Haley ‘Stuff’ as Day Three at Camp Wraps Up

great report, keep it up.